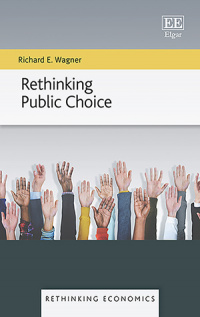 More Information
Critical Acclaim
Contents
More Information
Innovative in its approach, Rethinking Public Choice reviews the concept of public choice since the 1950s post war period and the application of economics to political practices and institutions, as well as its evolution in recent years attracting contributions from political science and philosophy.

Examining the growing variety of theoretical orientations on the topic, such as entangled political economy and additive political economy, the book provides new analytical insights into combining the old and new to establish a more unified political economy. Richard Wagner expertly highlights the key issues an entangled economy can bring, including incomplete information and its constant evolution as it reflects ever changing public choice ideas. Using illustrative models, Wagner seeks to extend the reach of public choice by distinguishing the formal idea of rationality that has dominated public choice from the immensely varied practice of human action that opens up now directions for public choice.

This insightful approach will prove an excellent resource for academics and scholars of economics and political science, as well as those within the field of public administration as it offers an excellent blend of all subjects.
Critical Acclaim
‘Richard Wagner adds insight to public choice theory by depicting the complex relationships among political and economic actors that social scientists often overlook. Wagner’s approach to public choice will lead readers to a more realistic and complete understanding of the nature of political processes.’
– Randall Holcombe, Florida State University, US

‘Critics of Public Choice often attack absurdly simplified, “straw man” versions of the approach. Wagner offers an important and timely corrective, giving the intellectual (and, importantly, MORAL) foundations of public choice and its offspring, “entangled” political economy. This fascinating book is an essential overview of where public choice came from, and where it might go next.’
– Michael Munger, Duke University, US

Contents
Contents: Preface 1. Public choice as the economics of politics: its post-war origin 2. Rational action, human association, and the primacy of the
social in human affairs 3. Thinking with models: an inescapable conundrum 4. Concepts and categories: how they influence where we
look and what we see 5. Simple stipulation vs. complex emergence as modes of inquiry 6. Parasitical tectonics within entangled systems of political
economy 7. The peculiar language of the public policy shell game 8. The multiple faces of federal government 9. Bureaucracy and the economic organization of political enterprise 10. What do central banks do within an entangled system of political economy? 11. Public choice, redistribution, and the relevance of the “Social Question” today 12. Eden, Babel, and some dialectics of constituting social order References Index
Add to Wish List