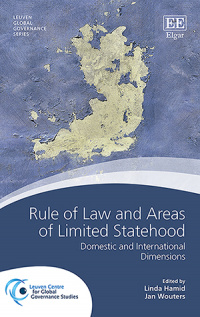 More Information
Critical Acclaim
Contributors
Contents
More Information
This thought-provoking book addresses the legal questions raised by the nexus between the rule of law and areas of limited statehood, in which the State lacks the ability to exercise the full depth of its governmental authority. Working from an international law perspective, it examines the implications of limited statehood for the traditional State-based framing of the international legal order.

This book will be useful for students and scholars of international law and international relations, particularly those working on sovereignty and statehood, non-state actors, State responsibility and the rule of law. It will also appeal to practitioners and policy-makers working in these same fields in either the State or global governance apparatus.
Critical Acclaim
‘International law presumes a set of territorially defined sovereign states, but in many parts of the world state control of territory is more fiction than fact. This path-breaking volume considers a whole host of questions about governance in places where the state’s writ does not run. International law will need fresh thinking if it is ever to affect the behavior of the rebels, gangs and unrecognized governments who actually govern beyond the state, and there is no better place to start than this book.’
– Tom Ginsburg, University of Chicago, US
Contributors
Contributors: J. Almqvist, B. Berti, O. Burlyuk, K. Chan, T. Eatwell, L. Hamid, P. Hesse, A. Magen, Z. Parcels, Y. Ronen, N. Tsagourias, J. Wouters