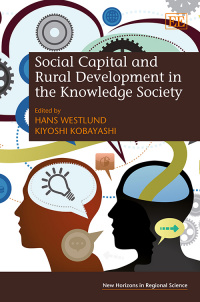 Social Capital and Rural Development in the Knowledge Society

More Information
Critical Acclaim
Contributors
Contents
More Information
Social capital is often considered a key factor for local development. This book analyzes the role of social capital for rural areas’ survival and development in the current age of metropolitan growth – an era in which urban is the norm and where rural areas must adapt to this new situation and build innovative urban-rural relations.

The traditional division between ‘rural’ and ‘urban’ is no longer valid in the knowledge society. Instead of being a homogeneous unit based on primary sector production, the countryside in the developed world increasingly consists of areas with very different development paths. With examples from Europe, Asia and America, the book discusses building and renewal of rural social capital from both bottom-up and top-down perspectives, and from the standpoint of business, and both the public and private sectors.

Being the first book to treat social capital and rural development in the age of megacities and the knowledge economy, it will be of great benefit to academics interested in social capital research and rural development.
Critical Acclaim
‘This book by Westlund and Kobayashi emphasises the fact that the gap between urban and rural areas is no longer relevant today: all places and regions are under a strong influence from cities. The authors show in a straightforward way that the continuum between more and less urbanized places requires new types of regulations, based on innovation and local skills, and that rural policies cannot be based on agriculture only but primarily require the mobilization of local social capital links.’
– André Torre, INRA – Agroparistech, Paris, France

‘“Rural” communities are not all resource dependent and very low-density places. Not all have people leaving in droves and no newcomers. This book’s theoretical arguments and case studies (from five countries) help one understand better the diversity of “rural”. We find population gainers, population losers; newcomers and long-term “stayers” together in sizable towns; Aboriginal communities where out-migration is limited. The diversity is a key dimension in the analyses of public and private action to build and maintain social capital.’
– Roger E. Bolton, Williams College, US

‘Overall, Westlund and Kobayashi must be congratulated for this excellent contribution highlighting development opportunities but also serious issues, and particularly the role of SC – one of the major assets of rural areas in the globalizing world. This book deﬁnitely provides many fresh ideas for academics as well as rural development practitioners.’
– European Journal of Development Research

4. Foundations of Collective Action: Towards a General Theory
Gautam Ray

6. Changes in Social Capital and Community Functions in Depopulated Areas from Case Studies of 12 Communities in the San’in District
Katsuhisa Ito

10. What Can Local Policies Do? An Activity Theory Analysis of Municipal Support to Local Innovations
Cecilia Waldenström

12. Collective Actors as Driving Forces for Mobilizing Social Capital in a Local Community: What Can be Learned for Health Promotion?
Malin Eriksson, Lars Dahlgren and Maria Emmelin