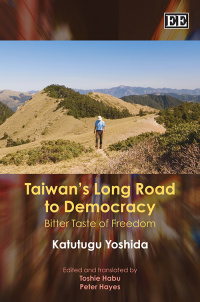 9781848440784 Edward Elgar Publishing
The late Katutugu Yoshida, Former Professor, University of Hyogo, Japan. Translated by Toshie Habu, Visiting Researcher, Asian Research Institute, Osaka University of Economics and Law, Japan and Peter Hayes, Senior Lecturer in Politics, University of Sunderland, UK
Publication Date: 2009 ISBN: 978 1 84844 078 4 Extent: 264 pp
This edited translation of Katutugu Yoshida’s Jiyuno Nigaiaji analyses the gradual process of reform in Taiwan over the past 100 years. It pays particular attention to the dilemmas, compromises and pitfalls that have faced reformists as they have strived to bring democratic change under a series of brutal dictatorships.

More Information
Critical Acclaim
Contents
More Information
This edited translation of Katutugu Yoshida’s Jiyuno Nigaiaji analyses the gradual process of reform in Taiwan over the past 100 years. It pays particular attention to the dilemmas, compromises and pitfalls that have faced reformists as they have strived to bring democratic change under a series of brutal dictatorships.

The author discusses the historical background to Taiwan’s current constitutional issues and its difficult relationship with the People’s Republic of China. It explores in detail the way in which local political activism has transformed national politics, providing original analysis of democratic political thought in East Asia and a rich explanation of the social, historical and political context of democratization in Taiwan. The book makes a significant theoretical contribution to the literature on political reform by using the Taiwanese context to explore debates between reformists and revolutionaries and to consider the development of the concept of the right to self-determination.

This challenging and stimulating book will strongly appeal to scholars and students with an interest in Asian studies, politics, public policy and public choice.
Critical Acclaim
‘. . . an intriguing and educational dissection of the Taiwan/China political system conflict and how Taiwan has gained its own identity and has become one of the most free countries in the world, Katutugu Yoshida provides a highly educational and informative read. Taiwan’s Long Road to Democracy is a core and vital addition to any history collection focusing on Asian politics.’
– The Midwest Book Review
Contents
Contents: Preface to the English Version: The Politics of Gradualism Introduction Part I: Middle Way Gradualism in Taiwanese Minpon Thought 1. Rivalry between Democracy and Dictatorship: The Three Principles of the People and the Five Yuan Constitution 2. The Chinese Magna Carta: The May Fifth Draft Constitution and its 12 Amendments 3. Taisho Democracy and Taiwanese Minpon (The Primacy of the People) Thought 4. ‘Party-State Dictatorship’ and the Republic of China Constitution 5. Peaceful System Change and the Democratic Magna Carta 6. The Constitution and the Common People Part II: Taiwan: Civil Rights and Self-Determination 7. The Penghu Archipelago and Taiwanese Nationalism 8. Taiwanese Nationalism and Civil Determination Rights 9. Common Issues for Independence and Unification: An Interview with Yuan T. Lee 10. Bitter Taste of Freedom: Questions to Lee Teng-hui Postscript References Index
Add to Wish List