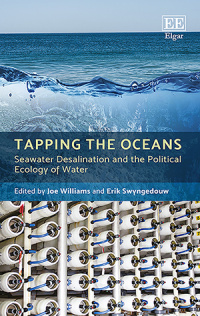 9781788113809 Edward Elgar Publishing
Edited by Joe Williams, School of Geography and Planning, Cardiff University and Erik Swyngedouw, Professor of Geography, School of Environment, Education and Development, University of Manchester, UK
Publication Date: 2018 ISBN: 978 1 78811 380 9 Extent: 208 pp
Increasingly, water-stressed cities are looking to the oceans to fix unreliable, contested and over-burdened water supply systems. Desalination technologies are, however, also becoming the focus of intense political disagreements about the sustainable and just provision of urban water. Through a series of cutting-edge case studies and multi-subject approaches, this book explores the political and ecological debates facing water desalination on a broad geographical scale.

Water supplies for cities around the world are undergoing profound geographical, technological and political transformations. Increasingly, water-stressed cities are looking to the oceans to fix unreliable, contested and over-burdened water supply systems. Yet the use of emerging desalination technologies is accompanied by intense debates on their economic cost, governance, environmental impact and poses wider questions for the sustainable and just provision of urban water. Through a series of cutting-edge case studies and multi-subject approaches, this book explores the perspectives, disputes and politics surrounding water desalination on a broad geographical scale.

As the first book of its kind, this unique work will appeal to those researching water and infrastructure issues in the fields of political ecology, geography, environmental science and sustainability. Industry and water managers who wish to understand the political debates around desalination technology more fully will also find this an informative read.

Critical Acclaim
‘This is a timely and insightful introduction to the entanglements of water, salt, power, and capital in the emergence of seawater desalination as a major feature – and maybe a future game changer – of the 21st-century water agenda.. . . desalination is breaking into our water future, and this book will be a key primer for those interested in deciphering its emergence.’
– François Molle, Water Alternatives

1. Mobilising the oceans to quench our thirst
Joe Williams and Erik Swyngedouw

4. On the Implications of Seawater Desalination: Some Insights from the Israeli Case
Eran Feitelson

7. Worlding via water: Desalination, cluster development and the ‘stickiness’ of commodities
Mark Usher

9. Commodifying the Pacific Ocean: Desalination and the neoliberalisation of water in Southern California
Joe Williams

10. Politicizing the salt of the seas
Erik Swyngedouw and Joe Williams