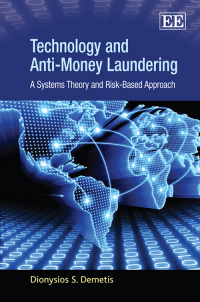 A Systems Theory and Risk-Based Approach

More Information
Critical Acclaim
Contents
More Information
This insightful book examines the influence of information systems on anti-money laundering (AML). It builds on systems theory in order to develop a coherent theoretical framework that can be used for AML research.

By using a case study of a major financial institution in the EU-area, a number of technological influences on AML are deconstructed and are used to examine the role that technology plays within AML. The book provides a systems theoretical description of the effects of technology on AML and offers considerations on the risk-based approach – the most important contemporary evolution within regulatory initiatives on AML and terrorism financing.

Technology and Anti-Money Laundering will appeal to researchers of financial crime and AML as well as those interested in information systems and systems theory. A number of considerations for practitioners are also discussed, including the risk-based approach and the integration of AML-technology in financial institutions, as well as an important data-mining application. Money Laundering Reporting Officers (MLROs) in financial institutions and central bankers will also find much of interest in this book.
Critical Acclaim
‘. . . a stimulating look at the hard work done in many specialisms that collectively seek to combat money laundering.’
– Sally Ramage, The Criminal Lawyer

‘While there is much noise about the control of money laundering, there are few whose work is able to rise above the din and in clear notes contribute in a constructive manner to the debate. This work is not only an intelligent discussion of many of the substantive issues relating to the control of money laundering, but a great deal more. Drawing on systems theory and seeing the control of money laundering particularly from the standpoint of technology as complex and integral to the proper and effective operation of financial institutions, the author addresses in a novel and practical way the design and management of risk based compliance. The theory is tested, not only in terms of viable technology, but also in an actual case study involving real issues in a bank. Consequently, those concerned with the formulation of policy, the design of controls and procedures and the implementation of such will find the contribution that this book makes of great significance.’
– Barry Rider, Bryan Cave LLP, UK

‘This book avoids the usual trap of interminably listing AML war stories. Instead Dr. Demetis presents a solid theoretical foundation for AML research and practice. He gives a damning critique of the way so-called technological solutions are used uncritically by some AML professionals, and analyses the risk-based approach, describing its problems and ways of avoiding them. He presents a fascinating in-depth case study of a financial institution, and a short case of a bank using technology to improve its True Positive Rate substantially to 17 per cent.’
– Ian Angell, London School of Economics, UK

‘Dr Demetis makes a great contribution to our understanding of anti-money laundering at both a systems and practical level. [He] writes as someone who not only thinks deeply about these issues but, as the in-depth case examples show, has tried to see how far technology can address some audacious goals. Readers will learn that while risk-based approaches to anti-money laundering have been an interesting regulatory development, practical implementation, despite the hype of technology vendors, is “still at a primordial state”.’
– Michael Mainelli, Gresham College and Z/YEN Group, UK
Contents
Contents: Preface 1. Introduction 2. Introduction to Anti-Money Laundering 3. On Systems Theory 4. The Case Study of Drosia Bank 5. Systems Theory – A Theory for AML 6. The Risk-based Approach and a Risk-based Data-mining Application References Index
Add to Wish List
eBook for individuals
978 1 84980 665 7
From $40.00
Click here for options
eBook for library purchase
978 1 84980 665 7
View sample chapter and check access on: