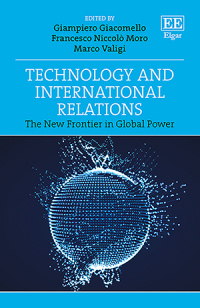 The New Frontier in Global Power

More Information
Critical Acclaim
Contributors
Contents
More Information
Exploring how changes in advanced technology deeply affect international politics, this book theoretically engages with the overriding relevance of investments in technological research, and the ways in which they directly foster a country’s economic and military standing. Scholars and practitioners present important insights on the technical and social issues at the core of technology competition.

Technology and International Relations emphasizes the importance of leadership styles, domestic political agendas and the relative weight of technologically driven countries in global affairs. It highlights the now widely shared belief among both developed and developing countries that technology will be the defining factor in international politics. The book also unpacks the complexity of real-life cases of key technological advances, including artificial intelligence, UAVs, satellites and the responses of governments and the private sector to rising technological challenges.

This will be an important read for scholars of political science, international relations and international political economy, particularly those looking at the impact of technology and innovation.

Critical Acclaim
‘The collective volume entitled Technology and International Relations: The New Frontier in Global Power reunites a group of specialists in contemporary technological developments with impact in international relations and addresses the topic of technology as source of empowerment in the near future global power starting from the recognition of the current paramount importance of technology in the exercise and concentration of power (and wealth) in our world.’
– Henrieta Serban, Nordicum-Mediterraneum