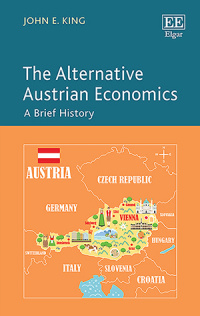 9781800889514 Edward Elgar Publishing
John E. King, Emeritus Professor, La Trobe University, Australia
Publication Date: 2021 ISBN: 978 1 80088 951 4 Extent: 232 pp
For most economists, ‘Austrian economics’ refers to a distinct school of thought, originating with Mises and Hayek and characterised by a strong commitment to free-market liberalism. This innovative book explores an alternative Austrian tradition in economics. Demonstrating how the debate on the economics of socialism began in Austria long before the 1930s, it analyses the work and impact of many leading Austrian economists through a century of Austrian socialist economics.

More Information
Critical Acclaim
Contents
More Information
For most economists, ‘Austrian economics’ refers to a distinct school of thought, originating with Mises and Hayek and characterised by a strong commitment to free-market liberalism. This innovative book explores an alternative Austrian tradition in economics. Socialist in spirit but too diffuse to be described as a single school of thought, it shares a common conviction that the market, while possibly a good servant, is a very poor master.

Demonstrating how the debate on the economics of socialism began in Austria long before the 1930s, this unique book analyses the work and impact of many leading Austrian economists. Beginning with the Austro-Marxist theorists Otto Bauer and Rudolf Hilferding and moving through to the new generation of social democratic economists, most prominently Kurt Rothschild and Josef Steindl, The Alternative Austrian Economics provides insight into the history and evolution of socialist economics in Austria.

Offering a previously underrepresented discussion of a century of Austrian socialist economics, this engaging book will prove to be of great value to Marxian and heterodox economists, historians of economic thought and political scientists interested in political economy.

Critical Acclaim
‘For the readers of this journal, the book offers a key to a captivating reconsideration of the evolution of their own school of thought. The mutual contestation of the two Austrian traditions - socialist and classical liberal, neoclassical and Marxist - gives the readers an enhanced understanding of one of the main sources of the intellectual motivation and vitality of canonical figures such as Mises, Hayek and their associates. At the same time, in many respects, the “alternative Austrian tradition” described by John King is just a sample of the larger European intellectual trends to which the market process theorists, methodological individualists, and classical liberal authors had to respond and engage during those years, providing an additional layer of relevance for the book.’
– Paul Dragos Aligica, The Review of Austrian Economics

‘Economists associate the Austrian school with the free market classical liberal ideas of Ludwig von Mises and Friedrich Hayek, Professor King describes the ideas of another group of Austrian economists: Marxists who were active in Vienna in the early twentieth century, and later Austro-Marxists who built on their work. King's book is a delightful description of this intellectual community, and explains how their work was designed to be an extension and updating of Marx's ideas.’
– Randall G. Holcombe, Florida State University, US
Contents
Contents: 1. Introduction 2. ‘Red Vienna’ and the Roots of Austro-Marxism 3. The Young Rudolf Hilferding 4. Otto Bauer 1904-1914 5. The Economics of Socialism 6. Otto Bauer 1917-1938 7. Other Voices 8. The Heirs. I: Josef Steindl 9. The Heirs. II: Kurt Rothschild 10. What is Left Bibliography Index