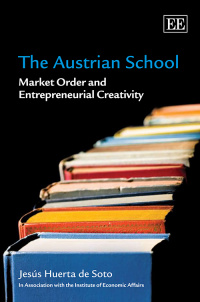 9781847207685 Edward Elgar Publishing
Jesús Huerta de Soto, Professor of Political Economy, Universidad Rey Juan Carlos, Spain
Publication Date: 2008 ISBN: 978 1 84720 768 5 Extent: 144 pp
The Austrian School forms a concise but comprehensive exposition of the main tenets of the modern Austrian School of Economics while also providing a detailed explanation of the differences between the Austrian and the neoclassical (including the Chicago School) approaches to economics.

• reviews of the contributions of the main Austrian economists, critical analysis of the major objections to Austrian economics and an evaluation of its likely future development
• complete exposition on the concepts and implications of entrepreneurship and dynamic competition
• a new concept of dynamic efficiency (as an alternative to the standard Paretian criterion) and a generalised definition of socialism (as a systematic aggression against entrepreneurship)
• evaluation of the role of Spanish Scholastics of the 16th century as forerunners of the Austrian School, as well as the influence and contributions of the main Austrian Scholars of the 19th and 20th centuries.

This book will most notably appeal to Austrian economists but also to other free market economists as well as researchers and academics of economic methodology, the history of economic thought, institutional economics and comparative economic systems.
Critical Acclaim
‘. . . this valuable book is a must read for any undergraduate in economics. . .’
– Irina Ion, Journal of Philosophical Economics

‘Professor Huerta de Soto is one of the leading representatives of the Austrian School of Economics. When one of the main tenants of an intellectual school publishes a book about the guiding lines of the school itself, he raises the bar significantly and sets the stage for a landmark contribution. . . Its reading is suggested both to the uneducated reader and to the Austrian scholar. . .’
– Massimiliano Neri, History of Economic Ideas

‘One of the most learned and creative of contemporary Austrian economists offers a more comprehensive and persuasive account of that school than any other known to me. Professor Huerta de Soto even finds antecedents among the scholastics of 16th-century Spain. He emphasizes the decisive role of entrepreneurs in discovering opportunities, creating knowledge, putting widely scattered knowledge to use, and promoting economic coordination. He compares Austrian economics (favorably) with contemporary mainstream work. All economists should be acquainted with these Austrian contributions, including economists who may not be entirely convinced on some points of money-macro theory.’
– Leland Yeager, Auburn University and University of Virginia, US

‘This volume sets out to present “the essential ideas of the Austrian school of economics”. However, its author, a foremost contemporary Austrian economist in his own right, has placed his own stamp on each of the themes he has covered. Few Austrians (and certainly not the writer of this comment) will agree with the author’s treatment of every theme. Yet all Austrians will recognize and value the superb clarity and power of this outstanding book. And all economists, Austrian or not, will appreciate the wide erudition and profound economic understanding reflected in this luminous work.’
– Israel M. Kirzner, New York University, US
Contents
Contents: Introduction 1. Essential Principles of the Austrian School 2. Knowledge and Entrepreneurship 3. Carl Menger and the Forerunners of the Austrian School 4. Böhm-Bawerk and Capital Theory 5. Ludwig von Mises and the Dynamic Conception of the Market 6. F.A. Hayek and the Spontaneous Order of the Market 7. The Resurgence of the Austrian School Bibliography Index
Add to Wish List