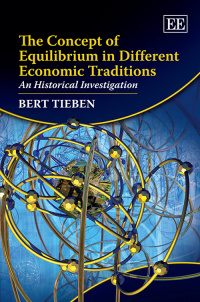 The Concept of Equilibrium in Different Economic Traditions

9781848449930 Edward Elgar Publishing
Bert Tieben, SEO Economic Research, The Netherlands
Publication Date: July 2012 ISBN: 978 1 84844 993 0 Extent: 688 pp
This book deals with one of the most puzzling concepts in economic science, that of economic equilibrium. In modern economics, equilibrium is considered a key assumption, but its role is contested by economists both from within the mainstream and from rival schools of thought.

More Information
Critical Acclaim
Contents
More Information
This book deals with one of the most puzzling concepts in economic science, that of economic equilibrium. In modern economics, equilibrium is considered a key assumption, but its role is contested by economists both from within the mainstream and from rival schools of thought.

What explains the contradictory assessments of the equilibrium concept in economics? Do economists belonging to different traditions disagree about the definition of equilibrium or do they adopt different rules for assessing scientific status? In this unique and exhaustive study, Bert Tieben answers these questions by investigating the history of equilibrium economics from 1700 to the present day. He concludes that ideology strongly coloured the development of this branch of theory, helping to explain the vehemence of the debates surrounding the concept. He also argues that scientific progress in economics may indeed be fostered by such opposition and contention, and calls for cross fertilization and stronger cooperation between the different schools of thought.

This resourceful book will appeal to post graduate students and scholars in the history of economic thought and economic methodology. Both neoclassical and heterodox economists, most notably Austrian, post Keynesian and institutional economists, will also find much to interest them.
Critical Acclaim
‘Bert Tieben is very well read in the history of economic thought and provides an overview of one of the basic concepts of economics that is unrivalled both in its scope and in its thoughtful and detailed discussion of the various currents and schools. It goes right to the heart of economic theory and asks some pertinent questions about the limits and the future of economic theorizing. That is, I think, what sets it apart from many other studies in the history of economic thought: it is history with an eye to the future, and it does all this without making any demands on the mathematical skills of the reader. This book should therefore appeal to everybody who is interested in the methodology of economics and in exploring the boundaries of economic analysis.’
– Hans Visser, VU University, Amsterdam, The Netherlands
Contents
Contents: 1. Introduction 2. What is Equilibrium? 3. Methodological Assessment 4. The Origins of Economic Equilibrium 5. The Circular Flow of Goods and Money 6. Adam Smith’s Love of System 7. Statics and Dynamics in Classical Economics 8. Mathematical Revolution 9. The Dreamland of Léon Walras 10. The Subjectivist Challenge of the Austrian School 11. Monetary Equilibrium 12. Dynamic Analysis in Monetary Theory 13. The Impact of Uncertainty 14. Creative Entrepreneurship: Chaos or Coordination? 15. Evolutionary Economics 16. Disequilibrium Foundations of Equilibrium Analysis 17. Economics With or Without Equilibrium? References Index
Add to Wish List