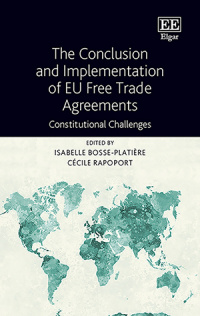 The Conclusion and Implementation of EU Free Trade Agreements

9781788974790 Edward Elgar Publishing
Edited by Isabelle Bosse-Platière and Cécile Rapoport, University of Rennes 1, France
Publication Date: 2019 ISBN: 978 1 78897 479 0 Extent: 328 pp
This timely book gives an overview of the main legal issues the EU faces in negotiating, concluding and implementing so-called ‘New Generation’ free trade agreements. Featuring contributions by international specialists on EU external action, this book demonstrates why these FTAs have become challenging for the EU, as well as analysing how the EU has dealt with its institutional constraints, and addresses contemporary debates and future challenges for EU institutions and Member States.

More Information
Critical Acclaim
Contributors
Contents
More Information
In recent years, the EU has negotiated a number of so-called ‘new generation’ free trade agreements (FTAs) with a significant number of emerging and industrialized partners, such as Canada, Singapore, Japan, Vietnam and others. This timely book gives an overview of the main constitutional issues the EU faces in negotiating, concluding and implementing these FTAs.

Featuring contributions by international specialists on EU external action, this book demonstrates why these FTAs have become challenging for the EU, as well as analysing how the EU has dealt with its institutional constraints in order to remain a major international trade actor. Chapters first examine questions around EU competences and democratic issues raised by these agreements, before dealing with their implementation and enforcement, approaching these topics specifically from an EU law perspective. Drawing on a broader research project conducted by the well-regarded LAwTTIP network, this invaluable book addresses contemporary debates and future challenges for EU institutions and Member States.

Scholars and advanced students of international economic relations and international and European economic law, particularly those with an interest in EU external action, will find this book essential reading. It will also prove useful to those working in EU institutions and WTO administration.
Critical Acclaim
‘The volume is an impressive collection of well-researched chapters focusing, first, on the conclusion of FTAs by the EU and secondly, on the implementation of these agreements. The division is sensible as both areas come with their own legal and practical peculiarities.... As pointed out by the editors, the EU needs to invent appropriate answers to the constitutional challenges that it still faces in its external trade relations to preserve its credibility on the international scene. This book gives a comprehensive overview of those challenges and some of the solutions that can be adopted (such as the division of the EU’s trade and investment agreements into two along the lines of competences).’
– Johanna Jacobsson, EU Law Live

‘This book could not come at a more appropriate time. New trade agreements between the EU and major trading partners around the world are giving rise to important questions about trade policy and the relationship between EU and international law. Opinions of the EU Court of Justice are proving controversial, and legal difficulties surround attempts by the UK to contemplate its own trade deals. This book’s penetrating and well argued discussions of these issues by European experts could not be more topical or more relevant.’
– Sir Francis Jacobs, King's College London, UK

‘This publication, edited by Professor Isabelle Bosse-Platière and Professor Cécile Rapoport, is the first of a series of three volumes being prepared within the LawTTIP Jean Monnet Network of the University of Bologna, King’s College, London and the University of Rennes I. It could not come at a more timely moment. In recent years, and notwithstanding the suspension of the negotiations on the bilateral trade and investment agreement between the EU and the US, a particularly complex labyrinth of bilateral free trade agreements has been established with a variety of important partners of the EU in the world. While this unprecedented development, no doubt, is a demonstration of the dynamic character of the EU’s external trade policy, it also gives rise to important constitutional and even existential questions. For the first time, a comprehensive legal analysis of this recent practice is now being made available, and every practitioner and scholar in EU external relations will benefit enormously from the immense in-depth research which has been undertaken.’
– Marc Maresceau, Ghent University, Belgium
Contributors
Contributors: J. Auvret-Finck, I. Bosse-Platière, F. Casolari, E. Castellarin, F. Castillo De La Torre, M. Chamon, L.-M. Chauvel, A. de Nanteuil, J.F. Delile, M. Gatti, E. Neframi, N. Neuwahl, C. Rapoport, G. Sangiuolo, A. Suse, C. Tovo, W. Weiß, J. Wouters

PART I THE CONCLUSION OF EU FREE TRADE
AGREEMENTS
2. The Opinion on the free trade agreement with Singapore
and its aftermath: some personal reflections 23
Fernando Castillo de la Torre
3. Mixity in the EU’s post-Lisbon free trade agreements 39
Merijn Chamon
4. Autonomy and EU competences in the context of free
trade and investment agreements 58
Eleftheria Neframi and Mauro Gatti
5. Like a bridge over troubled water: the 2/15 Opinion
through the lens of EU loyalty 85
Federico Casolari
6. EU law and diplomacy regarding negotiations during
Brexit and in the transition period: the case of UK/North
America trade 104
Nanette Neuwahl
vi The conclusion and implementation of EU free trade agreements
7. The role of national parliaments in the negotiation and
conclusion of EU free trade agreements 125
Carlo Tovo
8. The European Parliament and the Transatlantic Trade and
Investment Partnership 143
Josiane Auvret-Finck
9. The role of the European Citizens’ Initiative in the
negotiation and implementation of FTAs 159
Louis-Marie Chauvel