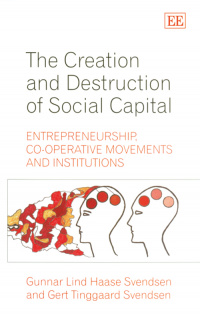 ‘The Svendsens are urging all social scientists to think more as social scientists rather than just as anthropologists, economists, historians, political scientists, or sociologists. Their effort to broaden the way social scientists think about social organization is an important step, especially for those of us interested in public policies. . . This is the type of book that should be assigned to graduate students across the social sciences as an illustration of the kind of work that they should aspire to do. I know I have learned a great deal from reading this book and appreciate the effort that the Svendsens have put in to crafting this study.’
– From the foreword by Elinor Ostrom
Contents
Contents: Preface Foreword by Elinor Ostrom 1. Introduction: The ‘Missing Link’ 2. Social Capital and Entrepreneurship 3. Co-operative Movements and Social Capital in Denmark and Poland 4. Bridging Social Capital and Entrepreneurship in Rural Denmark 5. Bonding Social Capital and Centralization: The Post-War Danish Co-operative Movement 6. Bonding Social Capital and Theory Effects: The Danish Village Society Movement 7. Bonding and Bridging Social Capital: A Contemporary Fieldwork Study 8. Conclusion Bibliography Index
Add to Wish List
eBook for individuals
978 1 78195 782 0
From $49.60
Click here for options