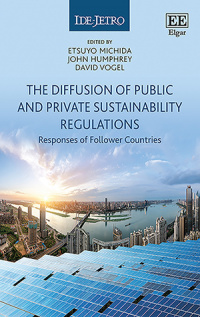 The Responses of Follower Countries

More Information
Critical Acclaim
Contributors
Contents
More Information
This book focuses on the spread of public and private environmental and food safety regulations from Europe and North America to Asia and Africa. It explores the growth of policy diffusion and standard alignment on sustainability observed in non-Western follower countries in a globalizing world.

The book examines the role of both developed and developing non-Western countries as followers that adopt food safety, environmental and sustainability policies under different conditions to those of the originating country. Chapters analyze non-state forms of transnational regulation, and how these have diffused to non-Western countries. They showcase how standard alignment efforts lead to multiple localized regulations determined by specific circumstances, highlighting the dilemma in designing policy in an era of globalization.

The use of in-depth case studies by renowned experts will make this book an important read for political science and economics scholars interested in trade, standards and international regulation. Policy-makers concerned with issues of sustainability in follower countries will find the book’s lessons on how to adapt policies helpful.