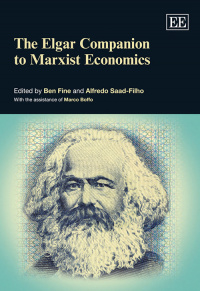 The Elgar Companion to Marxist Economics

More Information
Critical Acclaim
Contributors
Contents
More Information
This Companion takes stock of the trajectory, achievements, shortcomings and prospects of Marxist political economy. It reflects the contributors’ shared commitment to bringing the methods, theories and concepts of Marx himself to bear across a wide range of topics and perspectives, and it provides a testimony to the continuing purpose and vitality of Marxist political economy.

As a whole, this volume analyzes Marxist political economy in three areas: the critique of mainstream economics in all of its versions; the critical presence of Marxist political economy within, and its influence upon, each of the social science disciplines; and, cutting across these, the analysis of specific topics that straddle disciplinary boundaries. Some of the contributions offer an exposition of basic concepts, accessible to the general reader, laying out Marx’s own contribution, its significance, and subsequent positions and debates with and within Marxist political economy. The authors offer assessments of historical developments to and within capitalism, and of its current character and prospects. Other chapters adopt a mirror-image approach of pinpointing the conditions of contemporary capitalism as a way of interrogating the continuing salience of Marxist analysis.

This volume will inform and inspire a new generation of students and scholars to become familiar with Marxist political economy from an enlightened and unprejudiced position, and to use their knowledge as both a resource and gateway to future study.
Critical Acclaim
'This will be a valuable resource for scholars, many in fields outside economics, for whom Karl Marx remains such vibrant presence that he is still read and reread in small study groups. It is hard to imagine making any progress in understnading modern capitalise without at least some knowledge of teh basic categories and analytic language provided by Marxian political economy. Space did not permit mention of the many other stimulating chapters in this collection but they convery well that knowledge and language.'
– Thomas R. Michl, Journal of the History of Economic Thought

‘This book is a valuable contribution for everyone with an interest in understanding the theory and application of Marxist analysis. It goes well beyond just repeating or explaining what Marx wrote, or even what he had intended. Instead, each of the 61 essays collected in this volume explores a difference subject, some of which, such as Analytical Marxism, neoliberalism, and radical political economy in the USA, only arose long after Marx’s lifetime. . . This book deserves close attention, not just as an academic exercise, but rather as a tool to make sure that Marxist theory again becomes a vital part of wider social, political, and economic discourse, potentially contributing to moving the world a bit closer to Marx’s original vision.’
– Michael Perelman, Science & Society

2. The Agrarian Question and the Peasantry
Terence J. Byres

17. Ecology and the Environment
Barbara Harriss-White

18. Economic Reproduction and the Circuits of Capital
Ben Fine

30. Labour, Labour Power and the Division of Labour
Bruno Tinel

47. The Rate of Profit
Simon Mohun

55. The Transition from Feudalism to Capitalism
David Laibman