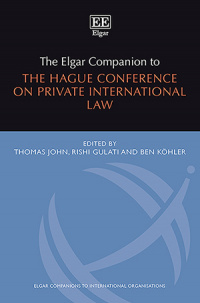 9781788976497 Edward Elgar Publishing
Elgar Companions to International Organisations series
Edited by Thomas John, ACIArb, Partner, Grotius Chambers, the Netherlands, Rishi Gulati, Fellow, Intlaw Research Group (KFG) International Rule of Law – Rise or Decline?, Berlin, Germany and Barrister, Victorian Bar, Australia and Ben Köhler, Senior Research Fellow, Max Planck Institute for Comparative and International Private Law, Germany
Publication Date: 2020 ISBN: 978 1 78897 649 7 Extent: 544 pp
This comprehensive Companion is a unique guide to the Hague Conference on Private International Law (HCCH). Written by international experts who have all directly or indirectly contributed to the work of the HCCH, this Companion is a critical assessment of, and reflection on, past and possible future contributions of the HCCH to the further development and unification of private international law.

More Information
Critical Acclaim
Contributors
Contents
More Information
This comprehensive Companion is a unique guide to the Hague Conference on Private International Law (HCCH), an intergovernmental organisation dedicated to developing multilateral legal instruments pertaining to personal, family and commercial legal situations that cross national borders. The Companion is a critical assessment of, and reflection on, past and possible future contributions of the HCCH to the further development and unification of private international law.

Written by international experts who have all directly or indirectly contributed to the work of the HCCH, chapters analyse its structure and working methods, as well as explore its significant achievements in the areas of international family law, civil procedure, legal co-operation, commercial and finance law. The contributors also discuss the many challenges both the HCCH and other global organisations are facing, including the advent of regionalism and renewed nationalism.

Critical Acclaim
‘In this book there are 35 contributions from foremost experts around the world. They deal with the history of the HCCH, its role in an increasingly globalised world, and its role in the future. Especially valuable is the critical analysis of the existing HCCH instruments. [...] All scholars in this field will need to take notice of this comprehensive work, and practitioners in ever-increasing international litigation will find much that is of great practical importance.’
– extracted from the Foreword by Lord Collins of Mapesbury, LLD, FBA, former Justice, UK Supreme Court

‘The Hague Conference is the symbol of efforts to coordinate divergent legal orders in the interest of individuals, families and undertakings. Various such efforts have been successful, producing instruments of worldwide effectiveness, others have failed; all of them contributed to a common ground for legal scholarship in private international law. The rich experience of more than a century is collected in this valuable book. Its 35 chapters address general institutional aspects of the Hague Conference, its increasing effects in continents outside Europe and a great number of specific issues covering the whole range of international commercial transactions, family relations and procedural co-operation. The editors and authors, well-known experts in their respective fields, have successfully compiled a volume that will be an indispensable guide to its subject for many years.’
– Jürgen Basedow, Max Planck Institute for Comparative and International Private Law, Germany

‘This Companion is a reflection of and tribute to the work of the Hague Conference on Private International Law over its 125 year history. The thirty-five chapters in the book consist of contributions by leading private international law experts – academics, practitioners, and judges – from across the globe. These chapters trace the development of the organization from its inception, review the various instruments produced by the HCCH, and discuss more generally substantive developments in private international law from a comparative perspective. The range of the Companion – like that of the Hague Conference itself – is comprehensive and covers issues of commercial law, family law, civil procedure, and judicial co-operation. Together the chapters underscore important themes that have been crucial to the HCCH: access to justice, the role of soft law, multilateralism, and the relationship between public and private international law. There is no work like it that I know of, and anyone who works in this field needs to have a copy and to read it cover to cover.’
– Linda J. Silberman, New York University School of Law, US

‘Elgar grants us this Companion to the HCCH, a gift to facilitate the understanding of its history and work, as well as showing a path to the future of private international law. Cleverly gathering contributions from renowned experts on relevant issues, Elgar’s Companion is not limited to a picture of a moment, but sets foot on solid bases to push further, revealing the cutting-edge issues that defy the idea of sovereignty nowadays.

Sovereignty: the abstract power vested in the Nation States. That is what substantiates private international law ideas and actions. The monopoly to compel people to do or not to do something is kept to the almighty State, without the possibility of any dispute. For three centuries, this abstract idea served the development of Nation States organized under the rule of law rather than under the rule of a person. It needed some adjustment, however, when those Nation States departed from their inward absolute power to realise the existence of other similar institutions vested with similar power within their own territorial and political scope.

Those ideas face real life when one assesses people’s day-to-day relationships and actions. They go to other countries (other Nation States) to buy food, to work, to entertain, to reach health services. People enter into business agreements abroad seeking profit or move to a different country to settle a new family or find a job, challenging the imaginary lines called borders and the abstract wall separating law systems. What would the power of the almighty Nation State do to those endeavouring to leave homeland safety?

Concerns for juridical safety, a general understanding of human rights protection, respect for genuine situations that blur the abstract construction of the Nation State’s sovereign power, together with the comity between States, all lead to the need to review some of the precise, logical national solutions.

The challenge faced by private international law and the HCCH is to open a window onto other Nation States’ law, be it through the exercise of jurisdiction over internationally connected cases, applying foreign law, co-operating in recognition of foreign judgments or documents, or by conducting relevant acts in favour of foreign authorities. From Tobias Asser’s leadership in 1893, the institution developed into an international intergovernmental organization in 1951 and onwards, growing in diversity of membership by the same Nation States that hold seemingly conflicting sovereign power.

This is the beauty of the HCCH’s work. It derives its mandate from the Nation States and has the objective of finding co-operation amongst them, the institutions that hold the autonomous, independent, and discriminatory power to elide foreign juridical solutions. HCCH furthers this work with delicate steps, exploring the will and interest of members to open their shells of power to the number of cases where consideration of a foreign juridical solution is elementary to resolving a particular situation. Elgar’s Companion to the HCCH grants us the knowledge to understand the past, present and future of private international law, as regarded from a universal viewpoint.’
– Marcelo De Nardi, Judge of the Federal Court of First Degree, Rio Grande do Sul, Brazil and Brazilian Delegate to the HCCH

‘Edward Elgar’s latest contribution to the field of private international law appropriately focuses on the sole intergovernmental organization dealing exclusively with issues in this area. Since 1955, the Hague Conference on Private International Law has developed into a truly global organization, with 45% of its membership joining since the turn of the century. Nevertheless, there remains scope for improvement of participation by countries in Africa and the Middle East. The contributions deal with the full range of Hague instruments; nonetheless, certain concepts surface continuously, including access to justice, cross-border legal co-operation, international human rights law, party autonomy and technological developments. Editors John, Gulati and Köhler should be congratulated on their initiative and the resultant substantial and valuable contribution to the available literature on the Hague Conference.’
– Jan L. Neels, University of Johannesburg, South Africa

‘COVID-19 has indelibly changed our daily lives and one might ask, in our seemingly brave new world, does the Hague Conference remain relevant? The answer is a resounding “yes” and this book shows why. Its chapters speak about what the Hague Conference has been (and is) doing well. They explain how the flexibility of key conventions has enabled them to stand the test of time and address a range of contemporary problems, from legal co-operation and civil procedure to the protection of the child and the complexities of commerce. But the chapters have not been written as eulogies. They repeatedly pose critical questions. They identify glaring weaknesses. They suggest how conventions can be improved for the decades to come. They propose new instruments to respond to our present exigencies.