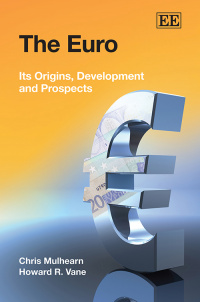 Its Origins, Development and Prospects

More Information
Critical Acclaim
Contents
More Information
This important new book provides a non-technical, comprehensive overview of the central issues surrounding the euro. Following an introduction to the origins of European integration, the authors proceed to examine the first concrete steps in the process that led to the creation of the euro area. The book then explores the economics and architecture of the euro, highlights the issues surrounding enlargement, and reflects on the future of European monetary union. To help bring the subject matter alive, the book also contains interviews with leading academics in the field including Willem Buiter, Nick Crafts, Paul De Grauwe, Patrick Minford, Niels Thygesen, Andrzej Wojtyna and Charles Wyplosz.

Primarily aimed at intermediate undergraduates taking courses not just in economics, but also in business studies, modern economic history, politics and international relations, this book will also prove useful to postgraduate students in these disciplines in their preliminary year of study.
Critical Acclaim
‘In its first ten years, the euro has certainly been able to turn itself into a subject of debate. It has to be noted, however, that between specialist press articles, urban legends and books on advanced economic analysis that are often offputting for beginners, few authors can claim to have written anything that is both reader-friendly and capable of feeding the debate among specialists. In this book, Chris Mulhearn and Howard Vane, bridge the gap. The wide-reaching tone of the book is hinted at in the title. It is written for everyman with the aim of providing readers with all of the information they require to understand the importance of the single currency venture. This is a considerable challenge and the authors carry it off magnificently. From the very first page, the book deftly meshes the political, economic and historical dimensions of the euro in a disconcertingly smooth fashion without ignoring technicalities. . . in this period of economic and financial crisis, when some are predicting the collapse of the single European currency, the book comes at the right moment because it provides a comprehensive and natural analysis of the issue. . . This book was, of course, written before the financial crisis, and only time will tell whether the crisis will invalidate the authors’ predictions. This does not change the fact that the book is an important contribution to European economic literature through its highly comprehensive coverage and user-friendliness.’
– Thomas Bauwens, Bulletin Quotidien Europe / Agence Europe

‘This is an exceptionally thorough and lucid book. It is rigorous but not mathematical. It deals with a topic of great importance, especially since the successful introduction of the euro might encourage the development of other monetary unions. Mulhearn and Vane analyze historical information using economic theory and show the importance of political constraints. Their book will be of great value to students and to their teachers.’
– Jerry Mushin, EH.NET

‘By any standards the introduction and embedding of the euro has been transformational, politically and economically. A decade after its creation Chris Mulhearn and Howard Vane have provided us with a comprehensive evaluation of its conception, birth, early development and future prospects. The book is balanced, dispassionate and written with admirable clarity. Readers will learn a lot from it and find themselves reflecting more clearly about the future of monetary policy in Europe. All in all an excellent volume.’
– David Greenaway, University of Nottingham, UK

‘This fine book provides a comprehensive overview of the development and design of the European Monetary Union, as well as an intriguing discussion of its prospects for future enlargement. A particularly compelling feature of the book is the set of fascinating interviews with some of the intellectual movers and shakers in the ongoing debate on EMU. This is an eminently accessible reference that should be required reading for all who seek to become familiar with the economics of the euro.’
– Andrew K. Rose, University of California, Berkeley, US
Contents
Contents: Preface 1. The Euro and the Origins of European Integration 2. Before the Euro: The First Steps in the Process of Monetary Integration 3. The Economics of the Euro 4. The Euro’s Architecture 5. Euro-area Enlargement: Denmark, Sweden and the United Kingdom 6. Euro-area Enlargement and the Accession Economies 7. Reflections on the Future of the Euro Bibliography Index
Add to Wish List
eBook for individuals
978 1 84844 288 7
From $49.60
Click here for options
eBook for library purchase
978 1 84844 288 7
View sample chapter and check access on: