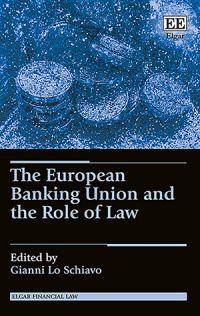 The European Banking Union and the Role of Law

With expert contributions from academics, practitioners and EU officials, this thought-provoking book provides different perspectives on the Single Supervisory Mechanism (SSM) and the Single Resolution Mechanism (SRM). Evaluating and proposing original interpretations on the EBU at a key stage of its development in the European Union, this book assesses topical issues relating to the institutional and administrative rules of the EBU, the interpretation and application of banking law, supervision and resolution frameworks, judicial rules and protection in the EBU. The book is structured into three parts: a general overview of the EBU framework and specific reflections on both the SSM and the SRM. The contributions show that the EBU is a successful European integration project, yet challenges still lie ahead.

This topical and engaging book will be an important resource for practitioners, and public servants in the financial sector. Academics and students of financial law and European law will also find this book a valuable read.
Critical Acclaim
‘The book edited by Gianni Lo Schiavo is a compelling piece providing a detailed legal analysis of the EBU building blocks. Inquiring the role of law in this domain is a very challenging task planned by the editor and the other fourteen authors of this book. The result is a fascinating and detailed account of the EBU development and challenges based on the analysis of political events, the emergence of new legal rules and procedures, and the actual European case-law.’
– Camila Villard Duran, La revue de la régulation

Introduction
Part I The European Banking Union – general framework
1. The relationship between the Banking Union and the Economic and Monetary Union: A re-telling of Cinderella with an uncertain happy ever after?
Gavin Barrett

5. Banking Union and Brexit: the challenge of geography
Pierre Schammo

9. The ECB and its application of national law in the SSM
Gianni Lo Schiavo

10. The SSM and the prudential regime of non-performing loans
Andrea Miglionico

13. Resolution framework and the protection of fundamental rights
Paolo Fucile