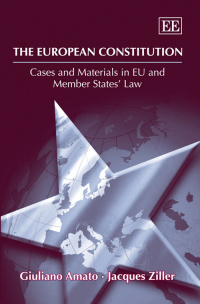 Cases and Materials in EU and Member States’ Law

9781848444652 Edward Elgar Publishing
Giuliano Amato, Vice-President, European Convention 2002–2003, Professor, European University Institute and former Prime Minister of Italy and Jacques Ziller, Professor of European Union Law, University of Pavia, Italy and formerly of the European University Institute, Florence, Italy and the Université de Paris 1 – Panthéon-Sorbonne, France
Publication Date: 2009 ISBN: 978 1 84844 465 2 Extent: 328 pp
This book offers a selection of materials that enable a better understanding of some of the most important changes that would be introduced by the Treaty establishing a Constitution for Europe in the EU legal and political system. It also helps to assess the need for the reforms embedded in the Constitutional Treaty as well as the quality of the formulations agreed upon by the signatory Member States.

More Information
Critical Acclaim
Contents
More Information
This book offers a selection of materials that enable a better understanding of some of the most important changes that would be introduced by the Treaty establishing a Constitution for Europe in the EU legal and political system. It also helps to assess the need for the reforms embedded in the Constitutional Treaty as well as the quality of the formulations agreed upon by the signatory Member States.

The European Constitution, by two of the best experts on the Constitution for Europe, will be of great interest to researchers and teachers in the fields of European Law and European politics, and also to policy makers in European affairs.
Critical Acclaim
‘I can enthusiastically recommend and endorse this book. It serves the very important purpose of collecting key documents together in an elegant and accessible text. There currently exists a huge proliferation of material on the EU Constitution – this volume makes a very wise selection of this profusion, compiling it into a manageable and informative whole. Nine chapters deal with the most significant matters concerning the Constitution. A short but well written introduction at the start of each chapter precedes following extracts. Part of the value of this book lies in the fact that it includes translations of some important documents which are difficult, or impossible, to access in English – for example, recent decisions of national courts concerning the European Arrest Warrant. All in all, this work is a comprehensive, but not overwhelmingly large, collection of materials on the EU Constitution, and it will prove extremely valuable to all those working within this area of law. By presenting the Constitution, the background to the Constitution, and the issues it deals with, in this clear and informative way, it will shed new light upon, and help all of us to form our own judgements on, the EU Constitution, and its importance to our lives.’
– Sionaidh Douglas-Scott, King's College London, UK

‘Whatever the ultimate fate of the EU’s Constitutional Treaty, both the events which led to its conclusion and those which occurred afterwards during its ill-fated ratification process have profoundly shaped the future of the European Union as a constitutional project. This collection of materials offers an invaluable set of resources for understanding these events, in their widest legal and political context. The text will be useful to all those who seek to understand both why the EU has reached such a turning point, and where it might go in the future.’
– Jo Shaw, Edinburgh Law School, UK

Contents
Contents: Foreword 1. The Ratification of the Treaty of Rome of 29 October 2004 Establishing a Constitution for Europe 2. Referendums in the Ratification Process: Constitutional Bases, Results, Consequences 3. Innovations in the Constitution for Europe 4. Primacy of EU Law 5. The EU Charter of Fundamental Rights 6. Competences, Legal Bases and Instruments in the Constitution for Europe 7. The Role of National Parliaments and the Principles of Subsidiarity and Proportionality 8. The Area of Freedom, Security and Justice 9. Developments under the Common Foreign and Security and Defence Policies Index
Add to Wish List
eBook for individuals
978 1 84720 678 7
From $56.80
Click here for options
eBook for library purchase
978 1 84720 678 7
View sample chapter and check access on: