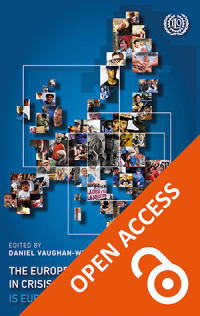 The European Social Model in Crisis

Is Europe Losing Its Soul?

9781783476558 Edward Elgar Publishing
Edited by Daniel Vaughan-Whitehead, Professor, University of Geneva, Switzerland and Sciences Po, Paris, France
Publication Date: June 2015 ISBN: 978 1 78347 655 8 Extent: 640 pp
This is an open access title available under the terms of a CC BY-NC-ND 4.0 License. It is free to read, download and share on Elgaronline.com.

This is the first book to provide a comprehensive and systematic assessment of the impact of the crisis and austerity policies on all elements of the European Social Model. This book assesses the situation in each individual EU member state on the basis of detailed empirical evidence and concrete case studies.

Under the pressure of the 2008 financial crisis and the subsequent introduction of austerity measures across Europe, many countries have reformed basic elements of the model including social protection, pensions, public services, workers’ rights, quality of jobs, working conditions and social dialogue, often undermining social cohesion. These trends have raised questions: is Europe currently losing its legacy? If so, what are the social and economic implications, both in the short and longer term? The European Social Model in Crisis assesses social policy developments in each EU individual member state on the basis of detailed empirical evidence and concrete case studies.

1. The European Social Model in Times of Crisis: An Overview
Daniel Vaughan-Whitehead

2. The Baltic States: Convergence with the European Social Model or Further Liberalisation?
Jaan Masso and Kerly Espenberg and Inta Mierina

4. The German Welfare State: From an Inclusive to an Exclusive Bismarckian Model
Gerhard Bosch

8. The European Social Model in a Context of Crisis and Austerity in Portugal
Pilar González and António Figueiredo

9. Turning Back before Arriving: The Weakening of the Spanish Welfare State
Rafael Muñoz de Bustillo and José-Ignacio Antón