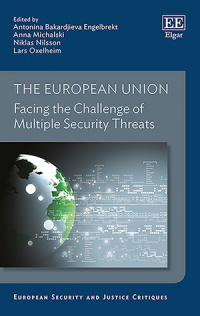 More Information
Contributors
Contents
More Information
Security in the European Union (EU) is an increasingly complex problem, with the spectre of disintegration looming over the Eurozone, and the threat of terrorism, insecurity and the long-term sustainability of food supply and fresh water reaching levels of crisis. This interdisciplinary book provides a unique insight into the multiple security threats that the EU is facing, and gives readers invaluable information about the challenges these pose to the Union.

With contributions from scholars of economics, law and political science, The European Union: Facing the Challenge of Multiple Security Threats provides a comprehensive analysis of contemporary security problems for the EU. Focusing on the latter end of the 2010s, this book examines in great detail the impact that developments in the rest of the world have had on the Union’s vulnerable state. Among the key contemporary issues examined are the migration crisis exacerbated by the conflicts in Syria and Libya, the increasingly strained relationship between the EU and Russia as well as the changing circumstances in the EU–US relationship brought on by Donald Trump’s presidency.

Tapping into the internal and external causes and impacts of security problems in the EU, this book offers important policy ideas for the future of the Union. It constitutes a vital read for policy makers and advisors in the EU, as well as for scholars of European political science, economics, and law.

2. The EU and the European security community: history and current challenges
Niklas Bremberg

3. After Lisbon: The new legal framework for the EU’s Common Foreign and Security Policy
Inger Österdahl

4. Sanctions and the security policy environment from a European perspective
Mikael Eriksson

7. The threats against innovation-based growth in the EU
Roger Svensson

8. Threats to personal data security: how does the EU protect its citizens?
Cecilia Magnusson Sjöberg