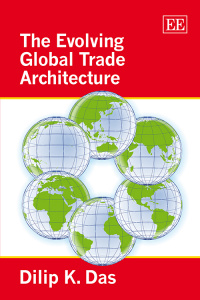 One glance at the recent history indicates that the evolution of the multilateral trade regime was far from even-handed and steady. The GATT/WTO system was repeatedly pushed to the brink of utter and ignominious disaster. Yet, as the author illustrates, the participating economies persevered. Consequently, the fabric of multilateral trade regime is stronger, its foundation deeper and its framework wider now than it was a generation ago. Unlike the GATT era, membership of the present trade regime is close to universal. The author concludes that of the two phases, the latter has turned out to be the more arduous, intricate and complex phase of evolution.

Students and scholars of economics, international trade, international political economy and international relations will find this study of great interest. The definitions and explanations of terminology and advanced concepts make the book accessible to those without an extensive economic background.
Critical Acclaim
‘This book is useful for scholars and practitioners who did not follow the GATT/WTO negotiations and who desire to acquire a comprehensive background on the subject.’
– Mordechai E. Kreinin, Journal of Economic Literature
Contents
Contents: Preface 1. Development, Developing Economies and the Multilateral Trade Regime 2. Necessity for a Development Round 3. Special Treatment and Policy Space for the Developing Economies in the Multilateral Trade Regime 4. The Fifth Ministerial Conference: The Wheels Come Off at Cancún 5. Enter the Developing Economies: Transforming the Landscape of the Multilateral Trade Regime 6. The Sixth Ministerial Conference: The Lean Hong Kong Harvest 7. The Doha Round: A Disenchanting Evolutionary Process Bibliography Index
Add to Wish List
eBook for individuals
978 1 84720 535 3
From $49.60
Click here for options
eBook for library purchase
978 1 84720 535 3
View sample chapter and check access on: