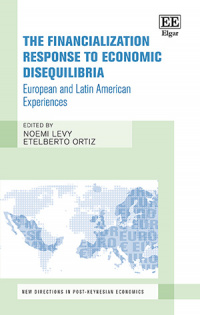 The Financialization Response to Economic Disequilibria

More Information
Critical Acclaim
Contributors
Contents
More Information
Europe and Latin America’s social and economic stagnation is a direct result of the unresolved phenomena of the financialization crisis that broke out in 2008 in developed countries. Editors Noemi Levy and Etelberto Ortiz analyze the limitations of economic growth and development under capitalist economic organizations where financial capital is dominant, as well as explore alternative economic policies.

This book argues that institutional settings based on the international monetary market, the global production organization and the international commerce arrangements need to be redesigned to improve countries’ economic growth, job opportunities and salaries. In order for economic disequilibria to be reduced among regions, countries and social classes, economic surplus appropriation must be regulated. Divided into four distinct thematic sections, the chapters discuss how income distribution must be re-evaluated in order to halt the economic crisis of developing countries in Europe and Latin America, and to boost a new cycle of economic growth and development.

This critical discussion will be of value to economic scholars and researchers, policymakers wishing to learn more about the limitations of economic growth, as well as journalists specializing in economic issues.

‘As finance emerged to agitate market equilibria, theories of financialization have set out to explain that agitation, and link it to deflationary and distributional trends in our economies. The challenge of financialization lies in the complexity necessary to incorporate finance effectively into models of production and distribution for economies that have become financial centres, as well as for countries where finance remains weakly developed. The editors and contributors of this book have risen to that challenge with a volume that lays out the new economics of open economy finance: a volume of first resort for those who wish to understand international finance today.’
– Jan Toporowski, SOAS, University of London, UK, University of Bergamo, Italy and International University College, Turin, Italy

‘Levy and Ortiz’s The Financialization Response to Economic Disequilibria is a timely book. It critiques mainstream economic theory and its limitations in explaining how economic conditions change or the transition from one state of equilibrium to another. Its analyses rely on Keynes, Kalecki, Kaldor, Minsky, Prebish, Furtado, and Marxists such as Luxemburg, Marini and Lapavitsas. Macroeconomic teachers interested in a heterodox approach may benefit from Levy and Ortiz’s book as complementary material with experiences showing the dysfunctionality of the global economy from the specific prism of financial disequilibria.’
– Economic Issues

INTRODUCTION
What are the Issues Now? Controversies About Disequilibria, Economic Growth, and Economic Policies
Noemi Levy and Etelberto Ortiz

PART I STRUCTURAL DESEQUILIBRIA IN EUROPE: WHAT TO DO
1. A Structural and Monetary Perspective of the Euro Crisis
Riccardo Bellofiore, Francesco Garibaldo and Mariana Mortagua

2. The Big Financial Crisis and the European Economic Adjustment: A Road Towards the Strengthening of the Neoliberal Agenda
Ma. Guadalupe Huerta

PART II THE FORCES OF DESEQUILIBRIA AT WORK: THEIR IMPACT ON GROWTH
4. The Periphery in the Productive Globalization: A New Dependency?
Alan Cibils and Germán Pinazo

7. Global Disequilibria and the Inequitable Distribution of Income
Alma Chapoy

11. The Accumulation Mode of Production in Mexico and the Economic Structure of the Manufacturing Industry
Luis Kato

PART IV DISEQUILIBRIA IN MEXICO: THE FINANCIAL AND FISCAL TRAP
12. Economic Growth and Financial Development in Mexico: From a Virtuous Circle of a Bidirectional Causality to a Financial Subordination
Teresa López and Eufemia Basilio