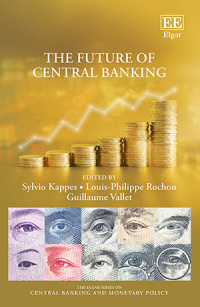 Chapter authors explore emerging fields of central bank’s actions, discussing, for instance, how monetary policy can affect income distribution, how it has differentiated impacts according to gender, how it can help to deal with climate change, and how it can promote financial stability and structural change.

Policy makers, academics and the financial press will all benefit from the insight in The Future of Central Banking.

Critical Acclaim
‘Central banking is about the provision of the means of payment, and payment is, whether we like it or not, at the core of the organisation of modern society. Therefore it should not come as a surprise that central banking will have to evolve with society and has to take up its ever changing challenges. The authors of this unique book are thought leaders in the various fields in which central banking has to react or can lead change of the economy and society. For central bankers the book is a rich source of inspiration for the coming years.’
– Ulrich Bindseil, European Central Bank

‘Over the last half century, the art of central banking underwent a significant transformation: from a de facto broadly-defined social role that was bestowed on these publicly-mandated institutions of the early postwar era to conduct monetary policy, via the balancing of numerous social and economic concerns, into what became a single-minded dogma of inflation fighting. Through force majeure, the Great Financial Crisis of 2007-2008 and the COVID-19 crisis have shaken this dogma to its core, thereby slowly leading to a redefining of the role of central banks for the twenty-first century. This book is unique in offering readers a rigorous analysis of some of the most important new and exciting directions in the art of central banking, from a concern with gender and the functional and personal distribution of income and wealth to dealing with the climate/ecological crisis.’
– Mario Seccareccia, University of Ottawa, Canada and International Journal of Political Economy