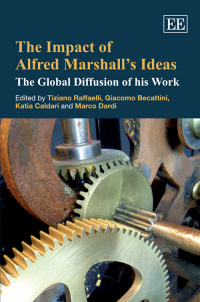 The Impact of Alfred Marshall’s Ideas

The Global Diffusion of his Work

More Information
Critical Acclaim
Contributors
Contents
More Information
This is a unique and detailed book which surveys the diffusion and reception of Alfred Marshall’s ideas and the ways they have influenced the development of economic science up to the present day.

This is an accessible and extremely readable work offering an interesting perspective on the national traditions of economic thought, in both English and non-English speaking countries, as well as on the work of leading economists. As this work demonstrates, the variety of responses elicited by Alfred Marshall’s thought testifies to its richness as well as to the plurality of conceptions of the role and tasks of economics in different times and places. This book complements the authors’ previous work The Elgar Companion to Alfred Marshall.

The Impact of Alfred Marshall’s Ideas will appeal to researchers and academics at all levels of economics and especially the history of economic thought.
Critical Acclaim
‘The book . . . offer's a "systematic country-by-country study of the impact of Marshall's ideas over the course of the last century." . . . while the volume contributes to the field of the history of economic thought, it also provides the reader with strong and valuable insights in the fields of intellectual and academic history. Overall, this book is a great supplement to post-Marshallian studies.’
– Lisa Arena, Journal of the History of Economic Thought

‘. . . this book is a worthy companion to the Elgar Companion to Alfred Marshall, although each chapter might very well be expanded into something more grand and fitting as tribute to the influence of Alfred Marshall.’
– C.R. McCann Jr., History of Economic Ideas

‘In Alfred Marshall’s theory of the human mind, the development of knowledge is conditioned, though not determined, by the context in which it occurs; by a natural extension, so is the interpretation, response to and use of knowledge. That is the organising principle of this book, and no one is better equipped to apply it than the team which produced The Elgar Companion to Alfred Marshall. What we can learn from these studies has wide application in economics – and beyond.’
– Brian Loasby, University of Stirling, UK

PART I: ‘CONVENTIONAL’ AND ‘NEW’ VIEWS OF ALFRED MARSHALL
1. Alfred Marshall’s Place in the History of Economic Thought: The ‘Conventional’ Interpretation
Anthony Brewer

PART VI: MARSHALL IN THE VIEWS OF SOME ‘ITINERANT’ ECONOMISTS
23. Pareto’s ‘Third Way’ between Marshall and Walras
Marco Dardi and Alberto Zanni

25. Nicholas Georgescu-Roegen and the Mecca of the Economist
Andrea Maneschi