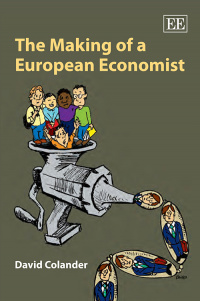 ‘In this captivating volume, David Colander scrutinizes economics in Europe, which is currently undergoing a radical process of convergence, standardization and metrication. While he acknowledges that the USA is the world leader in terms of journal publications in economics, he also suggests that the scholarly breadth and practical orientation of much economics research in Europe is worth preserving and enhancing. No-one who wishes to make economics more relevant should ignore Colander’s painstaking study.’
– Geoffrey M. Hodgson, University of Hertfordshire, UK
Contents
Contents: Preface Part I: Introduction 1. Introduction 2. The Making of a Global European Economist: Survey Results Summary Part II: Qualitative Results of the Survey 3. What Makes a Successful Economist? 4. What Students Like and Dislike about Graduate Work in Economics 5. Are Economists Relevant? Part III: Student Interviews 6. LSE Interviews 7. Pompeu Fabra Interviews 8. Bocconi Interviews 9. Stockholm School of Economics Interviews 10. Oxford Interview 11. Université Catholique de Louvain Interview Part IV: Conclusion 12. Conclusion: How Should Economists be ‘Made’? References Index
Add to Wish List