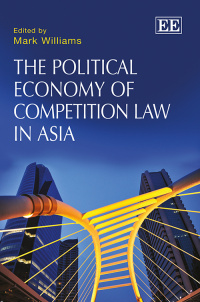 The Political Economy of Competition Law in Asia

More Information
Critical Acclaim
Contributors
Contents
More Information
This detailed book describes and analyses the essential political economy features that provide the backdrop to the competition policies and competition law regimes of several of the most important Asian economies.

The book also discusses the impact of these political economy influences in determining whether the adopted competition policy is effective. Each of the authors – experts in their respective countries – offer specific insights into the nature and structure of their competition regimes and discuss to what extent the varied political economy factors unique to that country help to determine whether and to what extent the established system promotes or hinders economic competition in that jurisdiction.

Comprising wide coverage of Asian jurisdictions, including Australia, this book will strongly appeal to students and academics of law, politics, economics and economic development, policy makers in national governments, international agencies and competition authorities, as well as practicing competition lawyers and in-house counsel.
Critical Acclaim
‘This is a very timely book which provides an unprecedented analysis of the factors which have shaped the competition law systems of ten Asian countries and Australia. The comprehensive discussion from varying viewpoints against the backdrop of the significantly different environments within which the respective regimes have developed creates a framework for the comparative assessment of competition law systems elsewhere in the world.’
– Lutz-Christian Wolff, The Chinese University of Hong Kong

‘New competition laws have been adopted throughout Asia in recent years, and some of the older laws have been significantly strengthened. This makes Asia a fascinating region in which to look at the political and economic circumstances of the countries in which such laws are to be found, and to consider the very different conditions that exist within them. This book will be an invaluable guide to anyone with an interest in the developing competition law regimes of this immensely important part of the world.’
– Richard Whish, King’s College London, UK

7. Malaysia and Singapore
May Fong Cheong and Yin Harn Lee