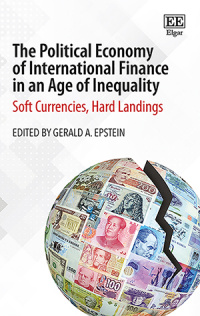 The Political Economy of International Finance in an Age of Inequality

The Political Economy of International Finance in an Age of Inequality begins with a discussion of capital flows and financial crisis, moves into an up-to-date discussion of the political economy of currency unions, and then focuses on analysis of capital flows and economic crises. New and established academics present a broad variety of special case studies within that general framework focusing on understudied yet important up to date cases from understudied regions and countries for a unique and important exploration of the field.

This book will be of interest to students and specialists in international finance, who will benefit from the combination of the strong general framework and illustrative case studies. Its approach will appeal both to generalists and specialists.
Critical Acclaim
‘The thoroughgoing disaster inflicted on the global economy in 2008 by the gambling of the financial system should have resulted serious sanctions for financial actors and the jettisoning of any belief in the efficacy and fairness of the neoliberal regime. But the tepid action of policy makers has allowed the system to muddle through and undermined any remaining trust and faith among the polity. It is not hard to see the breakdown of political stability across the world in the last two to three years as resulting direct from the justified belief that the rules of the global economy favor the very few.

In this book, a group of critical scholars painstakingly identify and illuminate key  aspects of the global financial system that continue to reinforce global inequalities of power and that contribute to dangerous political and economic instability. Through a series of thorough case studies ranging from the macroeconomic instability engendered by untrammeled capital flows, to the way sovereign debt restructuring favors northern creditors, to the hierarchy of the monetary system that concentrates enormous power in the hands of a few central banks, these studies throw light on the ways global financial neoliberalism and political and social power work to undermine macroeconomic stability and social justice. It will be read by serious scholars of the political economy of finance with great interest.’
– Arjun Jayadev, Azim Premji University, India and Institute for New Economic Thinking

‘This volume is a must read for everyone interested in the problems posed by the dollar-based international financial system for countries on the periphery of the world economy. The countries in question must first exchange their "soft" domestic currencies for “hard” currencies like the dollar before they can purchase goods, services, and assets in international markets. The authors of this volume offer a series of expert, well-researched, and critical analyses of the policies they can pursue to ensure greater equality and stability under these circumstances.’
– Edwin Dickens, Saint Peter's University, US

‘This important book expands the discussion of developments in international finance to take into account the power relations between countries that issue hard or soft currencies. It makes clear that the destructive power of large financial institutions has not abated and the impact of their speculation on developing and emerging market countries has intensified. While the book notes some positive trends such as the growing acceptance of the need for capital controls, the ongoing problem remains: the global economic architecture created by US dollar hegemony perpetuates instability and pervasive inequality within these countries and in their relations with the rest of the world.’
– Jane D'Arista, University of Massachusetts-Amherst, US

‘A much needed volume on the developments in the international financial system in the post-2008 crisis era. Through a combination of theoretical analyses and case studies, it uncovers the underlying economic and power structures in international finance and puts the inequalities in the global economy into perspective by focusing on institutions and power relations. The thought-provoking contributions to this volume are essential reading for researchers, students and policymakers and an ideal starting point for further research.’
– Ozgur Orhangazi, Kadir Has University, Turkey

Part I Capital Flows and Financial Crises
2. Financial Crises Among Emerging and Developing Economies in the Modern Era: A Brief History and Some Stylized Themes Elissa Braunstein

3. Too Good to Be True: What the Icelandic Crisis Revealed About Global Finance
Nina Eichacker

4. Reanalyzing the gender-specific effects of the Great Recession
Sana Khalil

Part III Power Relations in the International Financial System: Global and Regional Dimensions
9. The Cost of a SWIFT Kick: Estimating the Cost of Financial Sanctions on Iran
Mariam Majd