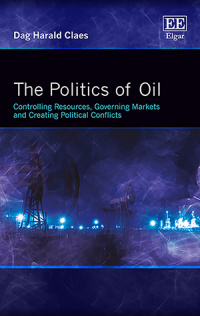 The Politics of Oil

9781839101533 Edward Elgar Publishing
Dag Harald Claes, Department of Political Science, University of Oslo, Norway
Publication Date: 2019 ISBN: 978 1 83910 153 3 Extent: 296 pp
The Politics of Oil brings together legal studies, economics, and political science to illustrate how governments gain and exercise control over oil resources and how political actors influence the global oil market, both individually and in cooperation with each other. The author also investigates the role of oil in preserving regime stability, in civil wars and in inter-state conflicts, as well as discussing the possible implications for the oil industry from policies to combat climate change.

Divided thematically into three parts, this book discusses the exercise of political control over oil resources, their extraction, and the income from oil exports; the vagaries of oil market forces and political attempts to govern them; and finally, the complex role of oil in international, regional, and domestic conflicts. Drawing on a number of academic perspectives, including economics, political science, philosophy, history, geology, and more, the key debates surrounding oil are explored. These include the role of OPEC, the future of oil in the context of climate change, and the part oil has played in civil war and terrorism.

Easily accessible, this introduction to the intertwined relationship between oil and political decisions and behaviour, is an essential tool for students of political science, economics, and energy related studies of all kinds. It is also valuable for policy makers, industry practitioners, and others interested in the oil business or governance seeking a comprehensive introduction to the subject.
Critical Acclaim
‘The Politics of Oil is a fascinating and informative study of the evolution of the international oil industry. The work profits from the authors interdisciplinary approach, which draws heavily on a number of fields including but by no means limited to geology, engineering, economics, philosophy, history and political science. The chapters are filled with a wealth of valuable information and insights on many of the pressing issues of our time: From climate change and the potential producer response to the resurgence of Iranian ambitions in the Gulf. To my knowledge, this is the only work of its kind providing a bridge between political and economic approaches to complex geopolitical issues such as the resource curse. It is readily accessible to the general reader interested in oil and politics. All the chapters can serve as supplementary material to academic courses in energy economics geopolitics and energy transitions.’
– Jennifer Considine, The Energy Journal

‘Dag Harald Claes has a unique knowledge of the politics, economics and (even more importantly from my point of view) the history of oil. He is one of the few who can blend together the three aspects in a simple and vibrant narrative. The Politics of Oil can be used as a reference in undergraduate classes, but will also be of interest for anybody dealing with the complexities of international energy and environmental politics.’
– Giuliano Garavini, European University Institute, Italy

‘This book masterfully discusses how governance, markets, and security come together in creating a nexus full of inspiration for scholars of International Political Economy. What does oil do to sovereignty? Is it a blessing or a curse? How long will OPEC still be in charge? And what does the future hold for the world’s most important commodity against the backdrop of climate change? The Politics of Oil will be an invaluable resource for everyone seeking answers to these crucial questions.’
– Andreas Goldthau, Royal Holloway University of London, UK
Contents
Contents: Part I Resource Governance 1. Sovereignty and Ownership 2. Governing Oil Production 3. Oil Income– Blessing or Curse? -With Mads Motrøen Part II Market Control 4. Institutional Governance 5. Producer Governance 6. Opec Part III Political Conflict 7. Oil and the US Hegemony 8. Oil and Regional Security 9. Oil and Domestic Conflicts 10. Climate Change and the Future of Oil Index

Research Handbook of Innovation for a Circular Economy

Research Handbook on Energy and Society