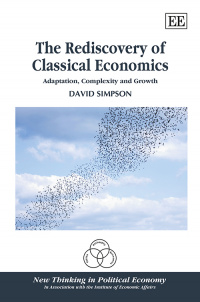 The Rediscovery of Classical Economics

9781781951965 Edward Elgar Publishing
New Thinking in Political Economy series
David Simpson, formerly Professor of Economics, University of Strathclyde, Scotland, UK
Publication Date: 2013 ISBN: 978 1 78195 196 5 Extent: 224 pp
David Simpson skilfully argues that a market economy can be best understood as a human complex system, a perspective that represents a continuation of the classical tradition in economic thought. In the classical tradition, growth rather than allocative efficiency is the principal object of enquiry, economic phenomena are recognised to be elements of processes rather than structures, and change is evolutionary.

More Information
Critical Acclaim
Contents
More Information
David Simpson skilfully argues that a market economy can be best understood as a human complex system, a perspective that represents a continuation of the classical tradition in economic thought. In the classical tradition, growth rather than allocative efficiency is the principal object of enquiry, economic phenomena are recognised to be elements of processes rather than structures, and change is evolutionary.

The book shows the common principles that connect the early classical school, the Austrian school and complexity theory in a single line of thought. It goes on to show how these principles can be applied to explain the characteristic features of a market economy – namely incessant change, growth, the business cycle and the market process itself – and argues that static equilibrium theory, whether neoclassical or neo-Keynesian, cannot satisfactorily account for these phenomena.

This fascinating book will provide a stimulating read for academics, postgraduate students and all those with an interest in economic theory and economic policy.
Critical Acclaim
‘The Rediscovery of Classical Economics is an important and welcomed book, which challenges the reader to contemplate what modern economics has so far accomplished and to consider in what way the classical paradigm may help replace it.’
– Frederic Sautet, Journal of the History of Economic Thought

‘This is a book you should read. Whether your interest is in economic theory or in its history, you should read this book. . . I cannot emphasise how radical this book is. It introduces you to a way of thinking that has now been all but lost yet is as powerful a lens for understanding an economy as has ever been developed. Moreover, the book is as clear and readable as any book you will have ever held in your hands. It will take you places you may never have been and help you understand issues that remain opaque because of the way in which eco-nomic issues are framed today. . . If you would like to have at least a sense of what is missing from economic theory today, other than my own there is no book I could recommend more than this.’
– Steven Kates, History of Economic Ideas

‘...the book is an ambitious attempt to sketch out the narrative on the old (classic) and new view of the ‘complex evolving economy’. It is thought provoking and stimulating: well worth a reading...the book offers two intertwined narratives, one focused on the interpretation of the long-term history of modern industrialization and contemporary growth, and another on the history of the theory and how it went astray. Both narratives are very knowledgeable and in most instances rather convincing...Simpson's essay is well in tune, indeed, with the authentic Smith.’
– Giovanni Dosi, Journal of Economic Literature

‘The diligent seeker of truth about our current discontents should turn to. . . The Rediscovery of Classical Economics, by David Simpson. . . Its ostensible object is to resurrect what he calls the “classical tradition” emanating from Adam Smith and distinguish it not only from Keynesian economics but also from today’s mainstream – known to aficionados as the “neoclassical” orthodoxy. Without going into academic details, this orthodoxy stands accused of replacing a theory of relative prices (how many loaves will buy a pullover) with a more sophisticated account of economic growth, and of foisting on us a theory of “rational expectations” that are anything but rational.’
– Samuel Brittan, Financial Times

‘This book puts human beings back at the heart of the economic process. It shows how this classical, human-centred tradition, stretching from Adam Smith onward, gives us a much better understanding of economic events – and what to do about them – than the mechanistic, mathematical models of too many economists and planners today.’
– Eamonn Butler, The Adam Smith Institute, UK

‘David Simpson writes about key economic issues with admirable lucidity. He draws deeply on experience as well as on his knowledge of economic theory.’
– Asa Briggs