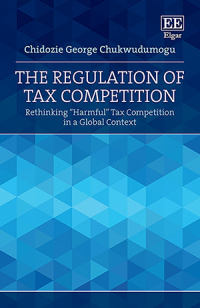 9781802200348 Edward Elgar Publishing
Chidozie George Chukwudumogu, Postdoctoral Research Fellow in International Tax Law, Department of Mercantile Law, Faculty of Law, Stellenbosch University, South Africa
Publication Date: 2021 ISBN: 978 1 80220 034 8 Extent: 240 pp
This comprehensive book adopts a nuanced yet straightforward approach to analysing the complex phenomenon of international tax competition. Using the ongoing international efforts of the Organisation for Economic Co-operation and Development (OECD) and the European Union (EU) as a basis for its analysis, it explores the mixed effects of tax competition and offers an effective approach that takes account of the asymmetrical global context.

More Information
Critical Acclaim
Contents
More Information
This comprehensive book adopts a nuanced yet straightforward approach to analysing the complex phenomenon of international tax competition. Using the ongoing international efforts of the Organisation for Economic Co-operation and Development (OECD) and the European Union (EU) as a basis for its analysis, it explores the mixed effects of tax competition and offers an effective approach that takes account of the asymmetrical global context.

Providing a history of the OECD’s work on tax competition to date, Chidozie George Chukwudumogu argues against conventional efforts to merely restrict international tax competition, putting forward a wide regulatory approach that is more appropriate and considerate of the inequality of the states involved. The author further explains and simplifies complex terms and principles of international tax policy, demystifies common assumptions about tax competition, and identifies commonalities beyond the often polarizing debates on the topic.

The Regulation of Tax Competition will be a crucial resource for academics, researchers and students with an interest in international tax law and policy. Policymakers in both international organisations such as the OECD and EU and in national governments will also benefit from awareness of the arguments explored in this book.

Critical Acclaim
‘This book provides a fresh and innovative look at an "old" yet ever topical question, that of tax competition. Chidozie Chukwudumogu guides the reader with mastery through the different elements and various distinctions of tax competition, and decomposes the approach adopted so far at international and EU level. Employing the concept of fiscal sovereignty, Chukwudumogu convincingly argues for a novel normative regulatory approach to tax competition that would allow for global redistribution.’
– Katerina Pantazatou, University of Luxembourg, Luxembourg

‘We are in an unprecedented era of rapid international tax reform. The previous consensus in international tax design among primarily high-income nations has been critically appraised by scholars and policy makers and found wanting. The OECD and its member countries are forming a new consensus. In this moment, Dr. Chukwudumogu’s book is essential reading. He proposes a new way of framing and promoting effective international tax relations, one that understands tax competition as a regulatory challenge.’
– Kim Brooks, Dalhousie University, Canada

‘Chukwudumogu challenges the dominant tax competition frame. Contending it fails to address the need for global redistribution in an asymmetric world, he advocates a “regulatory” approach that navigates states’ fiscal sovereignty rights and states’ duties to respect other states through cooperation. This work comes at a critical moment in international tax history— as policy frames are being rewritten and new voices and perspectives are taking center stage—and it offers readers a powerful and reasoned path for reconceptualizing the tax struggle among states.’
– Diane Ring, Boston College Law School, US

‘This is an outstanding and timely book. It’s core is the proposal to regulate rather than curb tax competition, which is precisely what the new OECD proposals are about. It should be read by anyone interested in the new international tax regime that is emerging from the current OECD framework.’
– Reuven Avi-Yonah, University of Michigan, US
Contents
Contents: Foreword: The Regulation of Tax Competition: Rethinking “Harmful” Tax Competition in a Global Context Preface 1. Introduction 2. The prohibitory approach to tax competition by the OECD, as supported by the EU 3. The effects of tax competition 4. The sovereignty analysis in tax competition 5. The regulation of tax competition: the regulatory approach 6. Final thoughts Bibliography Index
Add to Wish List
eBook for individuals
978 1 80220 035 5
From $40.00
Click here for options
eBook for library purchase
978 1 80220 035 5
View sample chapter and check access on: