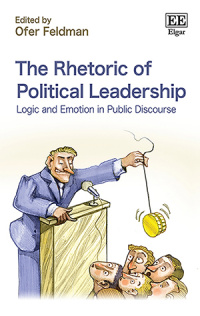 9781789904574 Edward Elgar Publishing
Edited by Ofer Feldman, Professor of Political Psychology and Behavior, Doshisha University, Kyoto, Japan
Publication Date: 2020 ISBN: 978 1 78990 457 4 Extent: 264 pp
This timely book details the theoretical and practical elements of political rhetoric and their effects on the interactions between politicians and the public. Expert contributors explore the issues associated with political rhetoric from a range of disciplinary perspectives, including political science, linguistics, social psychology and communication studies. Chapters examine what makes a speech effective, politicians’ use of moral appeals in political advertising, political attacks on social media, and gender and emotion in political discourse.

More Information
Critical Acclaim
Contributors
Contents
More Information
This timely book details the theoretical and practical elements of political rhetoric and their effects on the interactions between politicians and the public. Expert contributors explore the issues associated with political rhetoric from a range of disciplinary perspectives, including political science, linguistics, social psychology and communication studies.

Investigating critical emerging topics, such as invited behavior, political public relations, artificial intelligence and ‘chatbots’, this book offers a comprehensive overview of the current state of the field. Empirical data gathered from around the globe facilitates comparison of the different structures, practices and effects of political rhetoric employed across various cultural contexts. Chapters examine what makes a speech effective, politicians’ use of moral appeals in political advertising, political attacks on social media, and gender and emotion in political discourse.

The Rhetoric of Political Leadership will be a key resource for scholars and students of political science, communication studies and social psychology, particularly those focusing on cross-cultural perspectives. It will also appeal to those working in leadership and politics that are seeking an in-depth understanding of the importance and use of discourse in the political arena.

Critical Acclaim
'This volume is a must-read collection for scholars working in and across the fields of political science, social psychology, media communication and discourse studies. It does not only offer cutting-edge perspectives on rational and emotional attributes of political rhetoric, but also on their effects across a wide variety of societies and venues.'
– Anita Fetzer, University of Augsburg, Germany

PART III SOCIAL MEDIA DISCOURSE: POPULISM,
NEGATIVE CAMPAIGNS, AND THE USE OF
ARTIFICIAL INTELLIGENCE
11 They are lying to us! The rhetoric of direct communication
by populist politicians and its effects on the electorate:
evidence from the Netherlands 196
Michael Hameleers
12 Emotion, reason, and political attacks on Facebook : the
use of rhetorical appeals in the 2014 Brazilian presidential race 214
Ícaro Joathan and Francisco Paulo Jamil Marques
13 Political discourse through artificial intelligence:
parliamentary practices and public perceptions of chatbot
communication in social media 230
Chen Sabag Ben-Porat and Sam Lehman-Wilzig