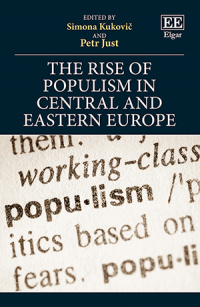 More Information
Critical Acclaim
Contributors
Contents
More Information
Cognisant of the ongoing pandemic and political turmoil across Europe, this timely book examines the growing influence of populist movements in Central and Eastern Europe. Simona Kukovič and Petr Just bring together contributions from experts working in the fields of political science and sociology to study the roots and ramifications of populism in this historically turbulent region.

Developing a critical analysis of both left- and right-wing populist movements and notorious populist leaders throughout Central and Eastern Europe, the book explores the ways in which populism has spread through developed and developing countries in both established and more recent democracies. Chapters investigate the origins of nationalist populism in the region, from historical trauma and social and economic instability to the emerging crisis facing traditional parties and institutions. It further considers the progressive impact of social media as a means through which populist leaders can penetrate the political space. Positioning itself in defence of liberal democracy, the book ultimately seeks to uncover what unites and inspires the populist community emerging across Central and Eastern Europe.

Contributing to the urgent scholarly debate surrounding the rise of populist leaders, political parties, and movements throughout Central and Eastern Europe, this incisive volume will be an essential read for researchers and academics invested in better understanding why the region is such a hotbed of European populism.
Critical Acclaim
‘The Rise of Populism in Central and Eastern Europe provides an insightful and valuable overview of how some political parties and actors have capitalised on the gradual rejection of the liberal elite censuses across post-communist countries of central and eastern Europe. The book is well crafted and skilfully edited to present chapters, from across central and eastern Europe, which provide a series of explorations as to how citizen alienation from political elites and the liberal consensus can see the rise of new political movements which challenge the established order. The book is an excellent addition to our knowledge and understanding of developing political phenomena.’
– Colin Copus, Emeritus Professor of Local Politics, De Montfort University, Leicester and Visiting Professor, Ghent University, Belgium

‘This very important book on populism in Central and Eastern Europe is especially timely, given the threats to democracy, the war in the Ukraine, the pandemic, and ongoing political polarization. Populism has risen around the world and emerged as a major political force in the region in countries such as Hungary, Slovenia, and Poland. This book contains excellent chapters by leading scholars in the region on the forces responsible for this surge in populism and its political and social impact on the region’s politics and policy. This book will immediately be the authoritative source for scholars, policymakers, and the broader citizenry interested in understanding populism in the region and the potential implications for democratic politics.’
– Steven Rathgeb Smith, American Political Science Association, US

‘The volume of studies written by political scientists from Central Europe offers new insights into the debates on the origins and consequences of the rise of populism in their part of Europe. It provides data on the trends of support for populist politicians as well as analyses of the ideological contours of populist politics. The authors point to the linkage between populism and nationalism and discuss the ways in which new democracies may be able to defend themselves. As such, the volume constitutes an important reading both for political scientists and for the general public.’
– Jerzy Wiatr, University of Warsaw, Poland
Contributors
Contributors include: Petr Bláha, Zoltán Bretter, Ladislav Cabada, Jakub Charvát, Rafał Dudała, Miro Haček, Petra Jankovská, Petr Just, Agnieszka Kasińska-Metryk, Boglárka Koller, Simona Kukovič, Karin Liebhart, Pavel Maškarinec, Vladimír Naxera, Matevž Tomšič, Agnieszka Turska-Kawa, Ingrida Unikaitė-Jakuntavičienė, Jaroslav Ušiak, Zoltán Vörös

1 Introduction: setting the scene 1
Simona Kukovič and Petr Just
2 Political elites, leadership, and the rise of populism 10
Matevž Tomšič
3 Right-wing populism in Austrian politics: traditional and
recent aspects 24
Karin Liebhart
4 Explaining the rise of populist parties in the 2013 and 2017
Czech parliamentary elections: economic grievances and
political protest? 39
Petr Bláha, Jakub Charvát and Pavel Maškarinec
5 A few populist statements don’t make a populist? The
issue of corruption in (non‑)populist communication of
Czech president Miloš Zeman 53
Vladimír Naxera
6 Re-nationalization or de-Europeanization? Collective
identities and identity politics in contemporary Hungary 67
Boglárka Koller
7 Comparative nationalism and populism: Hungary and
Romania as a case study 83
Zoltán Vörös and Zoltán Bretter
8 Populist political leadership and political parties in Lithuania 99
Ingrida Unikaitė-Jakuntavičienė
9 Fear determinants of populism in Poland: voters’ perspective 115
Agnieszka Turska-Kawa
10 Nationalism and populism in Poland: new threats, old fears 128
Agnieszka Kasińska-Metryka and Rafał Dudała
11 Populism in the context of the radicalization of society
in CECs: a case study of populist elements in the social
media communication of Slovak political actors 144
Jaroslav Ušiak and Petra Jankovská
12 Toward exclusion or inclusion? Acceptance and perception
of national populist parties in Slovakia: the case study of
the Kotlebists – People’s party our Slovakia (ĽSNS) 160
Petr Just
13 The secret of success: Slovenian populist political parties 173
Simona Kukovič
14 Anti-modern and anti-liberal narratives from the
pre-communist past as the source of the contemporary
populist and illiberal agenda in Central Europe 186
Ladislav Cabada
15 Conclusion: populism from the periphery to the mainstream 202
Miro Haček