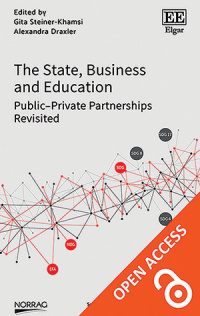 The State, Business and Education

The State, Business and Education contributes to the ongoing debates surrounding the effects of public funding of private entities by examining the ways in which they affect the quality and equity of those services, and the realization of human rights. Using case studies from both the developing and developed world this book illustrates the variety of ways in which private actors have expanded their involvement in education as a business.

More Information
Contributors
Contents
More Information
Businesses, philanthropies and non-profit entities are increasingly successful in capturing public funds to support private provision of schooling in developed and developing countries. Coupled with market-based reforms that include weak regulation, control over workforces, standardization of processes and economies of scale, private provision of schooling is often seen to be convenient for both public authorities and businesses. This book examines how the public subsidization of these forms of private education affects quality, equality and the realization of human rights.

This book will be of interest not only to academics and students of international and comparative education, but also to education development professionals in both the private and public sectors, with its empirical assessment of case studies, and careful consideration of the lessons to be learned from each.
Contributors
Contributors: M. Avelar, J. Barkan, M. de Koning, A. Draxler, C. Fontdevila, S. Kamat, F. Menashy, M.C. Moschetti, E. Richardson, B. Schulte, C.A. Spreen, G. Steiner-Khamsi, A. Verger, Z. Zakharia, A. Zancajo

4. Private participation in the education of Syrian refugees: Understanding the roles of businesses and foundations
Zeena Zakharia and Francine Menashy

5. Allies and competitors: Private schools and the state in China
Barbara Schulte

7. From billionaires to the bottom billion: who’s making education policy for the poor in emerging economies?
Carole Anne Spreen and Sangeeta Kamat

8. From low-cost to low-fee: BRAC’s transition to a for-profit private school model in Bangladesh
Emily Richardson

9. Death by a Thousand Cuts: Privatizing Public Education in the USA
Joanne Barkan