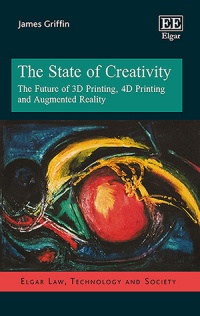 The State of Creativity

The Future of 3D Printing, 4D Printing and Augmented Reality

9781786438263 Edward Elgar Publishing
Elgar Law, Technology and Society series
James Griffin, Senior Lecturer, Law School, University of Exeter and Senior Visiting Research Fellow, Centre for Commercial Law Studies, Queen Mary University of London, UK
Publication Date: 2019 ISBN: 978 1 78643 826 3 Extent: 304 pp
Creativity has been of central importance to the development of the modern State, and yet creativity is something that has become increasingly side-lined. This has been particularly apparent with the development of new machinic technologies, such as 3D printing. This monograph argues that inner creativity, combined with the zone of discourse, has been endangered by the rise of administrative regulation. Griffin investigates how the failure to incorporate creativity into that administrative regulation is adversely impacting the regulation of technologies such as 3D printing. The State of Creativity, proposes reforms to ensure that the regulation does take creativity into account.

More Information
Critical Acclaim
Contents
More Information
Creativity has been integral to the development of the modern State, and yet it is becoming increasingly sidelined, especially as a result of the development of new machinic technologies including 3D printing. Arguing that inner creativity has been endangered by the rise of administrative regulation, James Griffin explores a number of reforms to ensure that upcoming regulations do take creativity into account.

The State of Creativity examines how the State has become distanced from individual processes of creativity. This book investigates how the failure to incorporate creativity into administrative regulation is, in fact, adversely impacting the regulation of new technologies such as 3D and 4D printing and augmented reality, by focusing on issues concerning copyright and patents.

This is an important read for intellectual property law scholars, as well as those studying computer science who wish to gain a more in-depth understanding of the current laws surrounding digital technologies such as 3D printing in our modern world. Legal practitioners wanting to remain abreast of developments surrounding 3D printing will also benefit from this book.

Critical Acclaim
‘This book is a great read for all those who wish to gain more understanding on how creativity works and the shortcomings of IP regulation, and a great starting point for further research and policy discussions in this exciting field.’
– Marc D Mimler, Bournemouth University, UK

‘This book will be particularly useful to scholars and students interested in pondering how the relation between creativity and legal regulation will play out in the face of emerging technologies. Regulators and policymakers may also find it helpful in considering legal reforms that are aimed at better shaping the creative State.’
– Ieva Giedrimaite, IPKat

‘This book discusses how emerging technologies link to innovation and creativity that can bring immense benefits to society, and stresses how legal systems (e.g., copyright) can help motivate and protect such development. I recommend the book to all technology enthusiasts who are keen on applying cutting-edge technology and knowledge.’
– Hing Kai Chan, University of Nottingham Ningbo China

‘This book is a very original account of the importance of creativity within society. James Griffin has incorporated a wide range of materials and subjects to develop and establish his core argument that creativity is critical to the future of humanity. The book should be a primary reference for regulators, policymakers and researchers considering legal reforms, especially for 3D printing.’
– Onyeka Osuji, University of Essex, UK
Contents
Contents: 1. The history of pro(creation) 2. A third dimension: Creativity and the Individual – State relationship 3. A virtual reality? Creativity and the Individual: The importance of creative space 4. A fourth dimension: The administrative core 5. A fourth dimension imperilled by the third? The threatening space between the zone of discourse and the administrative core 6. The flow of reproduction – The reproduction of creativity as part of the proprietary discourse 7. An augmented reality (1) – Identifying the process of creativity 8. An augmented reality (2) – Reform – The proposed licensing system 9. An augmented reality (3) – The proposed regulatory body 10. Conclusion – The future of the creative State Index

Allegiance, Citizenship and the Law