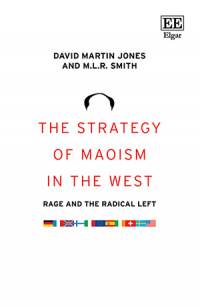 Rage and the Radical Left

Tracing the origins of Maoist ideas in Western politics, David Martin Jones and M.L.R. Smith expertly apply the principles of strategic theory to provide an understanding of how Mao’s ideas made their way from China into Western societies where they exert a profound and little understood impact on contemporary political conduct. The book offers critical insights into key theoretical discourses and their practical applications, including: Maoism, Orientalism and post-colonial discourse theory, Maoism and the mind, and Maoism and the politics of passion. Forward-thinking in its approach, it addresses the important question of where Maoism will end, analysing the trajectory that Maoism is likely to take and what the cumulative impact of it upon Western societies may be.

This invigorating read will be a fascinating resource for scholars of political theory and history wishing to gain an insight into the impact of Maoist ideas in the West. It will also provide students of international politics and international studies with a much greater understanding of China’s revolutionary thinking in world politics.
Critical Acclaim
‘The Strategy of Maoism in the West is a provocative, probing work that maps the ongoing ideological influence of Mao’s revolutionary message beyond post-World War II Asia. The authors, well-respected strategists whose study of insurgency and terrorism has been noteworthy for their fresh and innovative thinking, have produced another work of unique erudition and perspicacity.’
– Bruce Hoffman, Georgetown University, US

‘This insightful volume exposes the influence of Maoism on left wing intellectuals in the West. Jones and Smith reveal how not just Mao’s thought but the anti-democratic and often inhumane practices that came to be associated with China’s Cultural Revolution are today being rehabilitated in woke form. This superb book is a must-read for anyone wanting to understand what lies behind today’s dominant political trends.’
– Joanna Williams, Founder and Director of Cieo, UK

‘An excellent exposé of the neo-Maoist roots of rage in the West today that has sustained a nihilistic campaign against Western society and state, and which endangers the very democratic liberalism that we value but have taken for granted. A must-read for everyone concerned with what our future holds.’
– Andrew Tan, Macquarie University, Australia
Contents
Contents: Preface Introduction to The Strategy of Maoism in the West 1. Maoism and modern western political thought: a genealogy 2. China’s greatest export: Maoism, orientalism and post-colonial discourse theory 3. Maoism and the mind: the struggle for control over the interior realm 4. The strategy of rage: Maoism and the politics of passion 5. Creating the land of hatred: the strategic utility of Maoist inspired social discord 6. Signposts towards the Maoist end of history Conclusion: 西方文化大革命 (Xīfāng wénhuà dàgémìng) – the West’s Cultural Revolution Index
Add to Wish List
eBook for individuals
978 1 80220 946 4
From $40.00
Click here for options
eBook for library purchase
978 1 80220 946 4
View sample chapter and check access on: