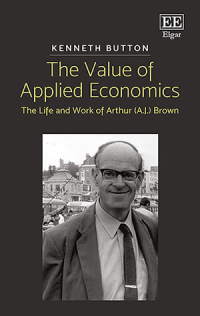 The Value of Applied Economics

The Life and Work of Arthur (A.J.) Brown

9781786433657 Edward Elgar Publishing
Kenneth Button, University Professor, Schar School of Policy and Government, George Mason University, US
Publication Date: 2017 ISBN: 978 1 78643 365 7 Extent: 256 pp
This biography of the applied English economist Arthur (A.J.) Brown, an English economist from the late 1930s to the 1980s, sets his work in the context of the Great Depression, the emergence of Oxford University as a centre of applied economic research, the contraction of British colonialism in Africa, the enlarging of the UK university system, the post –war arms race, the UK joining the Common Market, and significant changes in the industrial structure of Britain.

More Information
Critical Acclaim
Contents
More Information
This biography of the English applied economist, Arthur (A.J.) Brown, sets his work from the 1930s to the 1980s in the context of the Great Depression, the emergence of Oxford University as a centre of applied economic research, the contraction of British colonialism in Africa, the enlarging of the UK university system, the post-war arms race, the UK joining the Common Market, and significant changes in the industrial structure of Britain.

Brown’s approach epitomized the role the applied economist. His career included pioneering analysis in Keynesian economics, serving on official bodies concerned with decolonisation, and membership in the UN’s group to examine the economic implications of disarmament, the UK’s Hunt Committee, and the EEC’s MacDougall Commission. He was also heavily involved in building the Economics Department at Leeds University and serving on the University Grants Committee. Through Brown’s experiences, we are granted a unique perspective on applied economics research at Oxford University in 1930s as well as reviews of early debates over the Phillips Curve, the role of economics in British decolonisation policy, and the importance of UK regional policy in the 1970s.

Arthur Brown’s appreciation of both the technical side of economics and the need for practical, real-world advice for decision-makers makes this a important resource for academics interested in the history of economic ideas, inflation, liquidity preference, Keynesian economics, regional policy, decolonisation, and university finances, as well as economists working in government and industry.

Critical Acclaim
‘This book is a valuable study of an important applied economist who does not feature in conventional histories of economics.’
– Roger E. Backhouse, History of Economic Though & Policy

‘Arthur Brown was one of the finest applied economists of his generation. I benefitted from his wisdom both as a student and a colleague. His favourite aphorism that “the economy is made for man, not man for the economy” was his guiding principle. Ken Button has done a splendid job in highlighting the importance of applied economic research through the life and work of one of its foremost practitioners.’
– Tony Thirlwall, University of Kent, UK
Contents
Contents: Preface Foreword by Henry Brown and William Brown 1. Introduction 2. The development of an applied economist 3. Early career and Keynesianism 4. Building an economics department 5. African decolonization and world disarmament 6. The “Phillips Curve” and inflation 7. Domestic policy advisor 8. Regional economic policy and the Hunt Committee 9. Brown’s later activities References Index
Add to Wish List
eBook for individuals
978 1 78643 366 4
From $40.00
Click here for options
eBook for library purchase
978 1 78643 366 4
View sample chapter and check access on: