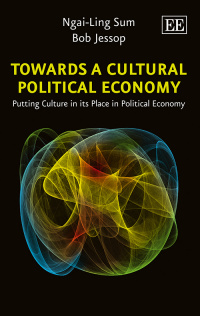 Towards a Cultural Political Economy

Putting Culture in its Place in Political Economy

More Information
Contents
More Information
This fascinating volume offers a critique of recent institutional and cultural turns in heterodox economics and political economy. Using seven case studies as examples, the authors explore how research on sense- and meaning-making can deepen critical studies in political economy, illuminating its role in critiquing the specific categories, contradictions and crisis-tendencies of capitalism.

Parts I and II provide a foundation in institutionalism, international political economy and historical semantics, before introducing an original account of sense- and meaning-making and its role in remaking social relations. This account connects the evolution of both economic and extra-economic concepts to dispositives (problem-oriented social fixes), institutions, and capitalist restructuring. In Parts III and IV, specific case studies demonstrate how this new research program can be applied to issues such as competitiveness, the knowledge-based economy, governmental technologies, institutional and spatio-temporal fixes and crisis management.