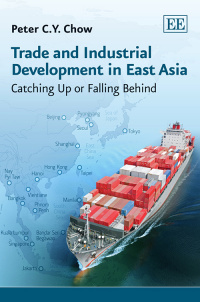 Catching Up or Falling Behind

More Information
Critical Acclaim
Contents
More Information
Trade as an engine of growth has played a catalyst role in East Asian development; through vigorous study of performances in past decades, East Asian trade and industrialization experiences may offer some lessons for other developing countries. This book covers trade and industrial structures for ten countries and regions including Japan, China, Hong Kong, Korea, Singapore, Taiwan, Indonesia, Malaysia, the Philippines and Thailand.

The author addresses the comparative advantages and trade similarity indices of Asian economies from regional and global perspectives. He also analyzes the impacts of regional trade agreements from both member and non-member countries’ perspectives. After a vigorous examination of the sources of export growth by the methodology of the constant market share analysis, the book examines the trade–investment nexus, the development of fragmentation of manufacturing production, and trade in parts and components as the dominant trade flows after the mid-1980s. It then studies the trade complementarity index among countries to further pursue the analysis of natural trading partners, and looks at the Krugman–Baldwin hub–spoke thesis by empirically identifying the ‘degree of hub-ness’ in three major markets in China, Japan, and the USA. Various scenarios of economic integration in East Asia are assessed and an open regionalism is proposed for East Asian economic integration and sustainable development in the conclusion of the book.

Students and researchers of international trade, economic development, and Asian Studies will find the data and analyses in the volume invaluable in understanding the economic development of the Asia Pacific.
Critical Acclaim
‘Chow’s book provides a comprehensive description of trade and foreign direct investment in East Asian economies by using a wide variety of trade-related indexes and regression analysis. Such detailed analysis is also complemented with an interesting narrative of institutional building for economic integration in East Asia. Thus, the book offers an invaluable reference and insights not only for those who are interested in the success of East Asian economies but also for those who plan to conduct an economic analysis on the East Asian model of economic development.’
– Kiyoyasu Tanaka, The Developing Economies

‘. . . this volume will be of interest to researchers interested in applying the standard tools of quantitative international economics to East Asian development experiences.’
– Hal Hill, Economic Record

Contents
Contents: Preface 1. East Asian Models of Development 2. Catching up or Falling Behind Hypothesis I: Trade Competitiveness between the Leader and Followers on All Manufactured Exports 3. Catching up or Falling Behind Hypothesis II: Trade Competitiveness on Exports by Technology Levels between the Leader and Followers 4. Trade Similarity Index and the Level of Development 5. The Dynamics of Changing Trade Structures: Export Sophisticated Index 6. Sources of Export Growth: A Constant Market Share Analysis 7. Trade–Investment Nexus and Intra-Industry Trade 8. Is East Asia a “Natural Trade Bloc”? The Trade Complementarity Index, the Intensity Index, and the Bias Index 9. East Asian Economic Integration and its Impacts on Regional and Global Economies 10. Conclusion Index
Add to Wish List
eBook for individuals
978 1 84980 483 7
From $40.00
Click here for options
eBook for library purchase
978 1 84980 483 7
View sample chapter and check access on: