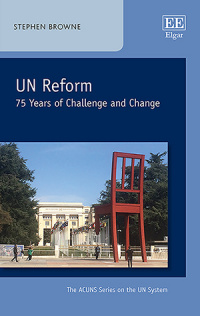 75 Years of Challenge and Change

9781788971683 Edward Elgar Publishing
The ACUNS Series on the UN System
Stephen Browne, Founder and co-director, Future United Nations Development System (FUNDS) project, Senior Fellow, Ralph Bunche Institute for International Studies, Graduate Center, City University of New York, US, Visiting lecturer on the UN and global governance, Graduate Institute of International and Development Studies, Switzerland
Publication Date: 2019 ISBN: 978 1 78897 168 3 Extent: 256 pp
Over three-quarters of a century, the UN has been impacted by major changes in the balance of powers among its member states, and is today threatened by nationalistic instincts. In this book, former UN insider Stephen Browne documents the textured history and numerous faces of the UN, from peacekeeper to humanitarian and development actor to stalwart defender of global human rights.

More Information
Critical Acclaim
Contents
More Information
Over three-quarters of a century, the UN has been impacted by major changes in the balance of powers among its member states. This unique and insightful book offers detailed commentary on its historic effectiveness and reviews the capacity of the UN to reform and adapt to global challenges. This book constitutes a judgement on the overwhelming importance as well as the vulnerability of multilateralism at a time when the UN has never been more indispensable.

This book describes:
• How autocracy in the US, China and Russia constrains the UN

• How the UN development system became an extended patronage system

• What the UN learnt from its peacekeeping failures, and how it continues to adapt

This impressive book will be vital to the staff of permanent missions of member governments to the UN, as well as UN secretariat staff. It will also benefit researchers exploring international organizations and the staff of development NGOs, as well as a broader audience of those interested in UN and global politics.

Critical Acclaim
‘In UN Reform: 75 Years of Challenge and Change, Stephen Browne, a United Nations (UN) veteran with many years of experience working in the UN development system and the founder of the Future United Nations Development System (FUNDS), delves into the inner workings of UN institutions, offering a highly insightful as well as empirically rich explanation of the UN’s inability to reform since its inception 75 years ago.’
– Giuseppe Zaccaria, The International Spectator

‘In UN Reform: 75 Years of Challenge and Change, Stephen Browne revisits the UN reform debate in a way that might actually make for effective change – provided enough people within, and outside of, the organisation read his book and adhere to its valuable advice.’
– Suzanne Graham, South African Journal of International Affairs

‘Stephen Browne, himself a veteran who toiled in the UN trenches, has written an important account of the struggles within the UN to change and reinvent itself.’
– Lord Mark Malloch Brown, Former UN Deputy Secretary-General

‘Stephen Browne has analyzed why the UN is so necessary yet such a relic. “Reform” has been under way since the ink dried on the Charter, yet the results are demonstrably inadequate for the problems of the second decade of the twenty-first century. Remarkable for its breadth and depth, this book could not be more timely, a compelling read for practitioners and scholars.’
– Thomas G. Weiss, The CUNY Graduate Center, US

Contents
Contents: Acknowledgements Foreword Introduction: What’s Wrong with the UN? 1. The Growing UN Edifice 2. Peace Operations: prevention better than cure 3. Human Rights and Justice: from back to front 4. The Humanitarian Record 5. The UN in Development 6. Reviving the UN through Achievable Reform Index