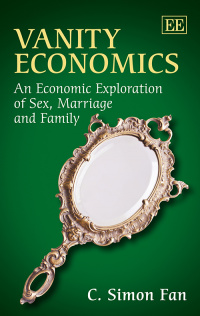 An Economic Exploration of Sex, Marriage and Family

In Veblen’s theory of conspicuous consumption, vanity is associated with the consumption of luxuries such as expensive handbags and cars. In this book, C. Simon Fan provocatively argues that vanity is obtained by having a spouse and children with perceived ‘high-quality’ values, for example, a beautiful wife, a tall husband or intelligent offspring. He demonstrates from various perspectives that vanity plays a crucial role in male–female relationships and intergenerational relationships. In doing so, he challenges the conventional frontier of economics and contributes to other social sciences.

This unique book will appeal to the educated general reader and interested academic alike.
Critical Acclaim
‘Vanity Economics is a very ambitious book. Its aim is to revisit the state of the art economic research on interpersonal relationships, both within the family and at the social level, through the lenses of a new, unifying concept: "vanity." The content is based on rigorous academic research that is made accessible to a wider audience. The book is in fact very entertaining and makes interesting reading even for nonspecialists, since it covers almost any conceivable topic touching the realms of sex marriage - including of course pre- and extramarital extensions - and social relationships from a provocative perspective. . . . the book can contribute to cultural economics by providing what, to my knowledge, is the first economic investigation of the influence of face on social interactions.’
– Graziella Bertocchi, Journal of Economic Literature
Contents
Contents: 1. Introduction 2. Vanity Economics: A Survey and an Extension 3. Vanity and the Consumption of Material Goods/Services 4. Marriage Markets 5. Vanity in Romance and Marriage 6. Vanity and Virginity 7. Sexual Liberation 8. Prostitution and Commercial Sex 9. Extramarital Affairs 10. Homosexuality 11. Classical Population Theory 12. Gary Becker, Vanity Economics and Modern Population Theory 13. The Cost of Children in Population Theory 14. Child Labour, ‘Working Daughters’ and Population Theory 15. Old-Age Support, Family Protection and Population Theory 16. Gender Bias, Gender Gaps and Population Theory 19. A ‘Population Problem’: Theory and Policy 20. Vanity and Divorce 21. Development and Divorce 22. Family Background and Children’s Education 23. Parental Behaviours and the Quality of Children 24. Intergenerational Transfers of Wealth 25. Family, Vanity and Consumption Puzzles 26. Vanity and Social Interactions 27. Vanity, Family and Migration 28. Epilogue Index
Add to Wish List
eBook for individuals
978 1 78347 231 4
From $40.00
Click here for options
eBook for library purchase
978 1 78347 231 4
View sample chapter and check access on: