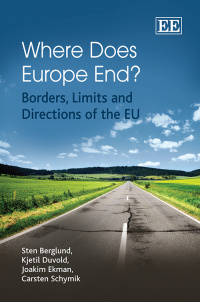 Where Does Europe End?

Borders, Limits and Directions of the EU

More Information
Contents
More Information
This original and thought provoking book addresses the major issues in the present debate surrounding the EU, including the impact of eastward enlargement as well as the prospect of further expansion.

Treating the EU as a single political entity comparable to other political systems, the authors discuss the implications of the neighbourhood programmes, the balance between vertical and horizontal integration, the constitutional crisis and the foundations of a potential European society. They also focus on topics rarely raised in the political and academic debate including the hybrid nature of the EU: It does not qualify as a state, but it is not just another intergovernmental organisation; it promotes democracy, but it is not yet a democracy in its own right. The EU is placed within a global federal context, and it is argued that the territorial expansion from the EU15 to the EU27 has added substance, but also complexity to the EU. All this makes the book a unique addition to the current literature.