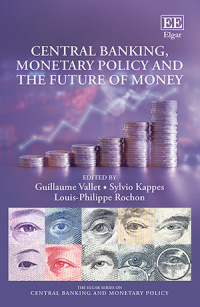 The book explores the complexity of the current monetary policy transmission channels and the issue of confidence in money. Scholars examine the specific relationship between central banking, monetary policy and the future of money, with a particular insight on digital and local currencies.

Scholars and students interested in central banking and monetary policy, the digitalization of money and the relationship between central banks and the growth of local currencies will value this timely take on the new realities of central banking.

Critical Acclaim
‘Research about the future of money is too often biased or incomplete because the potentialities of a single type of money (crypto-asset, central bank digital currency or local complementary currency) are analyzed by making technological development the main force for change. The authors of Central Banking, Monetary Policy and the Future of Money take up the challenge of approaching these potentialities by considering how the plurality of both material and institutional forms (public, private and community) evolves in various socio-economic and cultural contexts. We discover the possible scenarios in a future that is multiple and uncertain because it is constantly being reframed by the ever-changing present contexts.’
– Jean-Michel Servet, Graduate Institute, Geneva, Switzerland

‘The rapid evolution of forms of digital money has stimulated a vast wide-ranging literature on the “future” of money, especially the impact of the proliferation of cryptocurrencies on the relationships between monetary authorities and central banks. In contrast to the superficial speculative nature of much of the debate, the editors and contributors in this collection bring sound, meticulous scholarship and a thorough understanding of monetary theory and policy, setting an exemplary standard for future research.’
– Geoffrey Ingham, University of Cambridge, UK

‘This book on central banking, monetary policy and the future of money is driven by three talented economists under the auspices of post-Keynesian economics. Gathering many authors in its eleven chapters, the book largely explores the future under the heading of cryptocurrencies. Most articles deal with central bank digital currencies (CBDC), either theoretically or in describing this innovation in some countries. The theoretical underpinning, echoing Keynes’s view, is that CBDCs recover the sovereignty of money in the digital world.’
– Michel Aglietta, Centre d’Études Prospectives et d’Informations Internationales (CEPII), France