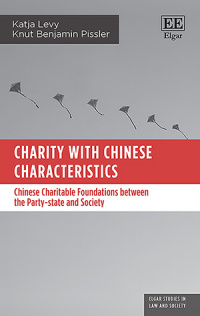 Chinese Charitable Foundations between the Party-state and Society

9781788115063 Edward Elgar Publishing
Elgar Studies in Law and Society
Katja Levy, Technische Universität Berlin and Knut Benjamin Pissler, Max Planck Institute for Comparative and International Private Law,Hamburg, Germany
Publication Date: 2020 ISBN: 978 1 78811 506 3 Extent: 320 pp
This thought-provoking book explores the functions of charitable foundations in the People's Republic of China. Using both empirical fieldwork and extensive textual analysis, it examines the role of foundations in Chinese society and their relationship with the Chinese government, and provides a new, functional perspective on the role of foundations, complementing mainstream civil society and corporatist perspectives.

More Information
Critical Acclaim
Contents
More Information
This thought-provoking book explores the functions of charitable foundations in the People's Republic of China. Using both empirical fieldwork and extensive textual analysis, it examines the role of foundations in Chinese society and their relationship with the Chinese government.

Taking an interdisciplinary approach, Katja Levy and Knut Benjamin Pissler offer a comprehensive overview of the contemporary legal and political frameworks within which Chinese charitable foundations operate, as well as an assessment of their historical and traditional contexts. They re-evaluate the existing literature on China’s civil society, and provide a new, functional perspective on the role of foundations, complementing mainstream civil society and corporatist perspectives.

This incisive book will be invaluable reading for scholars researching the third sector in China, as well as practitioners working in this sector. Scholars and students of contemporary Chinese law, politics and society will also find its insights useful.

Critical Acclaim
‘Charity with Chinese Characteristics has undeniable value as a source book. The citations and their comprehensiveness enhance this value. Scholars in topically related fields of study - including but not limited to civil society, welfare systems, authoritarian control systems, and political mechanisms at the grassroots - will find Charity with Chinese Characteristics useful as a comparative reference. For scholars of Chinese politics and society, and especially those working in the fields listed above, it is a recommended read.’
– Tom Cliff, The China Journal

‘This book will likely serve as the authoritative account of the legal
structures governing Chinese foundations for some years to come. For scholars wanting to engage with larger theoretical questions in international non-profit studies, the literature reviews and identification of various functions of foundations in and outside China also offer a ready guide for how to enter those debates. In short, many will find it an indispensable reference for understanding the legal environment for and functions of philanthropic foundations in China today.’
– Anthony J. Spires, The China Quarterly

‘The volume by Levy and Pissler definitely enriches our knowledge of how public and private is intertwined in China, and how philanthropy and nonprofits are systematically used to achieve both an improvement of governance and simultaneously an intensification CPC hegemony. The authors successfully manage to unveil the often referred to “Chinese Characteristics” that might be translated into a combined notion of Foucault's approach of governmentality and the Gramscian concept of hegemony.’
– Annette Zimmer, VOLUNTAS: International Journal of Voluntary & Nonprofit Organizations

‘Until recently, China had successfully followed the paths of Western governments eager to ease the regulatory barriers for large scale philanthropy in hopes of unlocking private resources to complement public expenditure. But as this deeply-researched, important study demonstrates, Chinese foundations only partially resemble their independent Western counterparts because they are effectively instrumentalized by the Chinese Party-state, as Levy and Pissler convincingly show by developing an innovative analytical framework. This book will be indispensable reading for anyone interested in Chinese philanthropy and civil society.’
– Stefan Toepler, George Mason University, US

‘One of the most important developments in China in recent years has been the rise of new wealth and how the Chinese Communist Party is responding. Charitable foundations are increasing in number and taking on roles formerly the preserve of government agencies. In this important study, Levy and Pissler look at the development of the sector and the constraints placed upon it by the authorities. A well-informed and important book that should be read by all interested in developments in contemporary China.'
– Tony Saich, Harvard Kennedy School, US

‘This is one of the first international books that deals with Chinese charitable foundations, broadly covering the third sector as well as the problems and opportunities of charity in China. It is an impressive interdisciplinary work authored by two renowned experts in the field. They rightly use a functional governance approach, present extensive historical and empirical data and provide excellent information on the current function of foundations in China’s society. In sum: A book not to be missed.’
– Klaus J. Hopt, Max Planck Institute for Comparative and International Law, Germany
Contents
Contents: Preface and Acknowledgements 1. Introduction PART I: STATE OF THE ART, THEORETICAL FRAMEWORK, RESEARCH QUESTION AND METHODOLOGY 2. State of the art 3. Theoretical framework: a functional governance approach to the study of foundations 4. Research gap, research question, data, and methodology PART II: THE EVOLUTION OF CHINESE CHARITABLE FOUNDATIONS 5. History and traditions of charity in China until 1978 6. Developments since 1978 PART III: THE LEGAL AND POLITICAL ENVIRONMENT OF CHARITABLE FOUNDATIONS IN CHINA 7. The legal framework of Chinese foundations 8. The political background of Chinese foundations PART IV: THE FUNCTIONS OF CHINESE FOUNDATIONS 9. Functions of Chinese Foundations 10. Conclusion Index

Allegiance, Citizenship and the Law

Research Handbook on Law and Literature