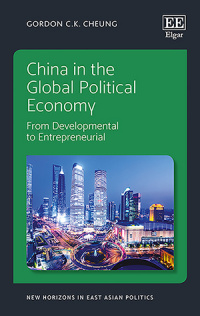 China in the Global Political Economy

From Developmental to Entrepreneurial

9781784714901 Edward Elgar Publishing
New Horizons in East Asian Politics series
Gordon C.K. Cheung, School of Government and International Affairs, Durham University, UK
Publication Date: 2018 ISBN: 978 1 78471 490 1 Extent: 224 pp
Is the US losing its economic authority to China, whose global economic identity is being determined more by entrepreneurial spirit than developmental principle? Through the exercise of soft power and hard currency in some areas of the global economy, China has clear national interest in the protection of intellectual property rights, financial integration and sovereign wealth funds. China’s Belt and Road Initiative and the Asian Infrastructure Investment Bank will set new standard to global economic development.

More Information
Critical Acclaim
Contents
More Information
Is the United States ceding its economic power to China? In this compelling book, Gordon C.K. Cheung uses theoretical exploration as well as empirical studies to scrutinize this key question and China’s complex relations with the global economy. Employing innovative concepts, the author demonstrates that China’s economic identity is now heavily influenced by the growth in its entrepreneurial spirit.

Critically questioning the ebbing authority of the US in the East Asian region, Cheung identifies how China’s exercise of soft power not only appeals to East Asian historical tradition, but also has begun to translate into tangible economic benefits. The author evaluates China’s future economic competitiveness in the global economy and how its performance will be tested in areas of national interest: the protection of intellectual property rights, financial integration and the role of China’s sovereign wealth funds. China’s two grand ambitions, the Belt and Road Initiative and the Asian Infrastructure Investment Bank – both of enormous significance to the future of global economic development – are also discussed.

With strong empirical evidence and a fresh perspective on China’s development, this book will be of great interest to postgraduate students of economics, international relations, business and globalization, as well as scholars and policy makers interested in China’s international influence.

Critical Acclaim
‘The book can serve as a useful starting point for understanding China’s ongoing economic, political, and social transformation, as well as its potential and the challenges it faces in its efforts to play a bigger role in the global political economy.’
– Zhiqun Zhu, The China Journal

‘Although Professor Cheung’s book came out some time ago, his assertion that the key to sustaining the stability of the international system lies in China shifting from a “developmental” economy to a “entrepreneurial” economy still rings true.’
– Andrew Wedeman, The China Quarterly

‘Cheung makes a timely contribution to better understanding China’s evolving role in the new global political economy. This book will prove useful and accessible for both China specialists and those who have relatively little understanding of the country’s economy and global influence.’
– Tian He, Pacific Affairs

‘A “must read” for policymakers, scholars, business people, and students who need to understand how China is impacting the global political economy.’
– Gilberto Llanto, Wiley

‘Through providing in-depth analyses on Chinese political economic development from the past decade, Cheung’s book has added great value to the current academic debate on China’s transformative impact on the global economy. Supported with theory, empirical studies and first-hand sources from the author’s personal fieldwork, the book provides an excellent illustration of China’s secret of success and its corresponding limitations. As the structure that Cheung analyses is a farsighted, long-term one, the book is highly likely to remain relevant in the field even after the Trump – Xi presidencies.’
– Simon Shen, Global Policy

‘This is a fascinating book that goes well beyond the conventional academic debates and focuses a great deal on China’s political-economic development in the past 10–15 years. It’s written in a highly accessible manner and filled with very timely information or evidence from the author’s original fieldwork and useful secondary sources. I am particularly impressed by the wide-ranging issues covered in this very readable book, from China’s massive industrial transformation and domestic entrepreneurship to more recent phenomena such as innovation, financialization, and globalization. It helps us understand far better China’s rise in the new global economy than many highly specialized monographs on China’s economic transformation.’
– Henry Wai-chung Yeung, Global Production Networks Centre, National University of Singapore