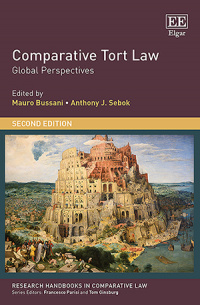 More Information
Critical Acclaim
Contributors
Contents
More Information
This revised second edition of Comparative Tort Law offers an updated and enriched framework for analysing and understanding the current state of tort law around the world. Using a critical comparative methodology, it examines common issues such as causation, economic and non-economic damages, product and professional liability, and the relationship between tort law and crime, insurance and public welfare schemes.

Featuring contributions from international experts, this book also provides a comprehensive comparative assessment of tort law cultures, contextualising them within the legal systems and societies that sustain them. Chapters cover many jurisdictions often overlooked in the mainstream literature, and explore illuminating case studies from tort systems in Europe, the US, Latin America, Asia and sub-Saharan Africa, including new chapters specifically discussing tort law in Brazil, India and Russia.

Comparative Tort Law is a critical tool for students, scholars and academic researchers, especially those specialising in tort and comparative law. It will also be useful to policymakers, practitioners and judges, in particular those dealing with differing tort law systems.

Critical Acclaim
‘Many readers could benefit from consulting this book as an introductory text, or having it on-hand as a ready reference guide on comparative tort law concepts. This book will be a useful primer for a variety of readers, including practitioners who are looking for an introduction to comparative tort law and researchers who are interested in thinking about tort law’s philosophical and global concepts.’
– Anna Price, International Journal of Legal Information