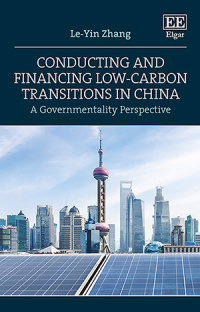 More Information
Critical Acclaim
Contents
More Information
Utilizing a governmentality lens, this timely book offers an explanation for China’s decarbonization performance in the early 21st century. Le-Yin Zhang investigates one of the most ambitious governing projects in history, analyzing the political rationalities of Chinese leaders for decarbonization and the governing techniques and technologies at multiple levels of governance.

Demonstrating the potential of combining the use of juridical, administrative and governmental powers, Zhang holistically considers the success of the state in instigating low-carbon transitions in China and mitigating climate disaster. The book provides an in-depth exploration of the art of greening the Chinese financial system and how this links to a wider formulation of carbon governmentality, highlighting the rise of the carbon governmental state through a range of governmental technologies. Engaging with a wide range of primary data from both national and local levels, the author uncovers profound lessons in low-carbon transitions for other states in the making of a carbon-neutral world.

This cutting-edge book offers key insights for scholars and researchers of environmental governance and its importance in mitigating climate change, particularly those with a key focus on Chinese climate policy. It will also benefit government officials, researchers and consultants investigating potential avenues for low-carbon transition and climate action.

Critical Acclaim
‘Suffice to say it is truly original and illuminating. She shows how China’s government has successfully combined discourse and leadership with an evolving range of policy instruments to bring about the widely recognized achievements in constraining the rise of carbon emissions.’
– Philip Andrews-Speed, The China Quarterly
Contents
Contents: 1. The China phenomenon 2. Understanding China’s low-carbon transitions in theory 3. Beneath China’s low-carbon transitions: political rationalities 4. Beneath China’s low-carbon transitions: governing techniques and technologies 5. Greening the financial system in China 6. Localizing the low-carbon transition: a tale of three Chinese cities 7. Conclusion: the rise of a carbon governmental state in China References Index
Add to Wish List
eBook for individuals
978 1 78897 739 5
From £25.00
Click here for options
eBook for library purchase
978 1 78897 739 5
View sample chapter and check access on:

Handbook of Civic Engagement and Education