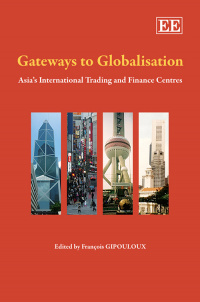 9780857934246 Edward Elgar Publishing
Edited by François Gipouloux, Emeritus Research Director, Centre National de la Recherche Scientifique, École des Hautes Études en Sciences Sociales, Paris, France
Publication Date: 2011 ISBN: 978 0 85793 424 6 Extent: 288 pp
Asia’s trading and financial hubs have become global cities which frequently have more in common and closer linkages with each other than with their corresponding hinterlands. As this book expounds, these global cities illustrate to what extent world trends deeply penetrate and permeate the national territorial interiors and processes that were otherwise presumed to be controlled by the State.

More Information
Critical Acclaim
Contributors
Contents
More Information
Asia’s trading and financial hubs have become global cities which frequently have more in common and closer linkages with each other than with their corresponding hinterlands. As this book expounds, these global cities illustrate to what extent world trends deeply penetrate and permeate the national territorial interiors and processes that were otherwise presumed to be controlled by the State.

This well-detailed and thorough work will interest academics and post-graduate students in economics, geography, finance, history, regional studies and Asian studies, as well as those who have a general interest in globalisation.
Critical Acclaim
‘A new geography of economic power is emerging in East Asia. Written by leading experts in the areas of globalization, trade, producer services, financial centers, logistics and R&D, the book provides indepth and updated analyses of the leading role of Hong Kong, Shanghai, Tokyo, and Singapore in the recent rise of Asia as a major manufacturing base and exporter. The book reveals the historical, geographical, socio-economic and political peculiarities in the formation of world cities in East Asia.’
– Jianfa Shen, Hong Kong Institute of Asia-Pacific Studies and The Chinese University of Hong Kong