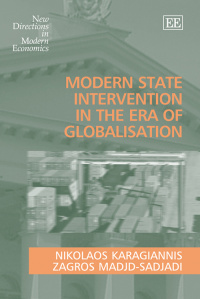 Modern State Intervention in the Era of Globalisation

9781845429805 Edward Elgar Publishing
New Directions in Modern Economics series
Nikolaos Karagiannis, Professor of Economics, Winston-Salem State University, US and Zagros Madjd-Sadjadi, Assistant Professor of Economics, Winston-Salem State University, US
Publication Date: 2007 ISBN: 978 1 84542 980 5 Extent: 360 pp
The authors of this book argue that in order to meet the challenges of globalisation and promote their own economic welfare, governments need strong policy instruments that will enable them to take up a strategic role in selected policy arenas. They illustrate how this retooling of policymaking requires a rethinking of the form of government intervention and, especially, an emphasis on its modern developmental role.

More Information
Critical Acclaim
Contents
More Information
The authors of this book argue that in order to meet the challenges of globalisation and promote their own economic welfare, governments need strong policy instruments that will enable them to take up a strategic role in selected policy arenas. They illustrate how this retooling of policymaking requires a rethinking of the form of government intervention and, especially, an emphasis on its modern developmental role.

The book begins with chapters exploring theoretical issues such as: economic and political aspects of the state, the impact of government expenditure, the case for and against free trade, and neoclassical and Keynesian approaches to public finance. Succeeding chapters examine fiscal policy, development problems in the European Community, and the success of Japan, South Korea, Taiwan, Singapore and Hong Kong. The final chapters present the Developmental State argument not only as a coherent theory but more importantly as a realistic development policy framework.

This will be an important reference text for students and scholars of public sector economics, public finance, East Asian studies, development studies and governance. Policymakers will also find the in-depth discussions a valuable tool.
Critical Acclaim
‘In Modern State Intervention in the Era of Globalisation, one in Edward Elgar’s commendable series New Directions in Modern Economics, Nikolaos Karagiannis and Zagros Madjd-Sadjadi contribute handsomely to our understanding of the development of the modern state and its contemporary challenges and dilemmas. . . Karagiannis and Madjd-Sadjadi systematically lay out conceptual definitions, historical patterns and theoretical disputes which show, if nothing else, that the roots of current disagreements lie in the retrievable past and that when those roots are carefully examined, much contemporary squabbling over policies and practices can be contextualized and, in the unlikely event that good will can be found among the contestants, suitably put to rest.’
– Howard A. Doughty, The Innovation Journal

‘Globalisation has often been seen to spell the end of effective State action to improve economic performance. In this provocative book, Nikolaos Karagiannis and Zagros Madjd-Sadjadi strongly challenge that view, investigate the nature of State activities and use the idea of a developmental state to map out policies which can be effectively used in the present era.’
– Malcolm Sawyer, University of Leeds, UK

‘Nikolaos Karagiannis and Zagros Madjd-Sadjadi in this very interesting book on the economics of interdependence range widely from agricultural subsidies to comparative advantage, national sovereignty to global cooperation, political democracy to social welfare. Institutionalist and comparative in its economics, open and pragmatic in its recommendations, their book on a new world order is a stimulating reminder that the big issues of culture, intervention, cumulative causation and regional disparities remain as important and as relevant today as they were when Plato, Mun and List made collective action the centrepiece of the science of things.’
– David Reisman, Nanyang Technological University, Singapore and University of Surrey, UK

‘Modern State Intervention in the Era of Globalisation is a thoughtful and well-researched assessment of the evolving role of the state in the contemporary world economy. This work is provocative because it goes against the predominant arguments in favor of a minimal state, as commonly asserted by neoclassical economics. Instead, Karagiannis and Madjd-Sadjadi think “outside of the box” and produce both theoretical arguments and evidence from important cases such as the EU, Singapore and Hong Kong to support the idea of a viable and continuing role for the “Developmental State”. The scholarship underlying this very readable book, which includes contemporary material as well as ancient economic thought, is truly impressive. Readers will be left with much to reconsider about the benefits of globalisation.’
– Patrick James, University of Southern California, US
Contents
Contents: Preface Introduction Part I: Theoretical Issues 1. Economic and Political Aspects of the State 2. The Role of the State and Government Expenditure 3. Globalisation: Problem or Solution? 4. Why Free Trade isn’t Free – and Shouldn’t Be 5. Public Finance and Taxation Part II: Global Experiences 6. Fiscal Policy and the Case of EC/EU 7. EC/EU Problems and Government 8. The Experience of Japan, South Korea and Taiwan in Retrospect 9. A Tale of Two City-States: Singapore and Hong Kong Part III: Modern Policy 10. The Developmental State View 11. The Developmental State and the EC/EU 12. The Relevance of the Developmental State Today Bibliography Index
Add to Wish List
eBook for individuals
978 1 78100 840 9
From £25.00
Click here for options