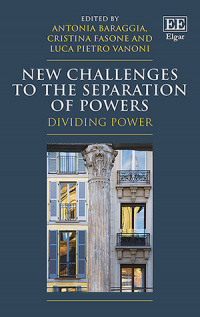 New Challenges to the Separation of Powers

This unique book will be of interest to students and academics of comparative constitutional law, as well as constitutional and political theorists, lawyers and judges.

Critical Acclaim
‘In reflecting on the separation of powers, the authors of this diverse collection of essays engage fruitfully with Giovanni Bognetti's basic insight (famously enlivened by the Baron de Montesquieu himself) that the best constitutional theory is sensitive to time and place, and to the ever-changing political, social and economic landscapes of governance.’
– Peter Cane, Christ's College, Cambridge, UK

‘The book is an important, timely and rich contribution to modern constitutional theory on separation of powers. Separation of powers and its contemporary challenges are analyzed in light of the modern political, societal and global context drawing on comparative perspectives. It is a very interesting and dynamic book which provides the reader with a broad picture of the current debates on separation of powers and on how to find the balance between the original fundamental principle on which many democracies are built and the need to redefine its meaning in a modern, global and comparative context.’
– Helle Krunke, University of Copenhagen, Denmark

‘The indefatigable trio of Baraggia, Fasone and Vanoni have once again joined forces to produce an exciting and innovative resource for scholars in public law. This cutting-edge book brings together leading authorities in constitutional studies to diagnose and contextualize the present and future of the separation of powers. The editors have curated a brilliant set of chapters shining comparative, historical and theoretical light on enduring and emerging questions that will now have better answers thanks to this book.’
– Richard Albert, The University of Texas at Austin, US
Contributors
Contributors: A. Baraggia, J. Baroš, F. Biagi, E. Carolan, F. Clementi, P. Dufek, M. Iacometti, T.T. Koncewicz, D. Kosař, S. Leone, I. Pellizzone, A. Pin, Z. Pozsár-Szentmiklósy, I.A. Tassopoulos, L.P. Vanoni, A. Vedaschi, F. Venter, V.Z. Zencovich

PART II TRANSFORMATIONS OF THE SEPARATION
OF POWERS IN NATIONAL CONTEXT
7 Introduction to Part II 101
Francesco Clementi
8 The separation of powers in new constitutions 104
Francois Venter
9 Unpacking the separation of powers 123
Jiří Baroš, Pavel Dufek and David Kosař
10 The transformation of political parties and the guardians of
the Constitution: the evolution of the power structure in the
Italian system 143
Stefania Leone and Irene Pellizzone

PART III THE SEPARATION OF POWERS UNDER PRESSURE
11 Introduction to Part III 165
Arianna Vedaschi
12 “The symbolic jurisprudence”: Theorizing constitutional
(re)capture, testing the limits of separation of powers and
reimagining the judicial review 179
Tomasz Tadeusz Koncewicz
13 EU “strict conditionality” from the perspective of the
separation of powers 202
Ioannis A. Tassopoulos
14 North Africa and the Middle East after the Arab uprisings:
a new separation of powers? 223
Francesco Biagi
15 Conclusion 243
Miryam Iacometti