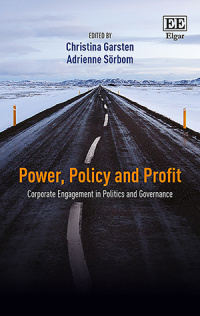 Corporate Engagement in Politics and Governance

More Information
Critical Acclaim
Contributors
Contents
More Information
Power, Policy and Profit investigates the many ways in which corporate actors attempt to influence political activities. Through the intensified globalization of markets, the restructuring of welfare services and the accumulation of private capital, opportunities for corporate influence in politics affairs are shown to have multiplied.

Bringing together different fields of global governance studies, this book addresses the rising political influence of corporate actors both nationally and internationally. Corporate influence on policy is now commonplace through lobbying, advocacy and campaign contributions; funding analysis and research; creating or adopting standards for social responsibility and shaping transparency guidelines. Key chapters show how corporations can now have leverage in broad political affairs: an activity central to the organization of markets.

Critical Acclaim
‘An expansive, incisive analysis documenting the sprawling and fast-evolving growth of corporate power in policymaking venues across the globe. Pushing the narrative far beyond a simple money-in-politics storyline, the authors illustrate how corporations exert increasing influence in the public sphere and often gain the upper hand vis-à-vis nation-states. Anyone concerned about democratic standards and accountable governance will find this book a must-read.’
– Janine R. Wedel, George Mason University, US

‘This challenging book revisits the relationships between state and market by accounting for the unexpected development of corporations as policymakers, an emergent, global phenomenon. The authors address this fascinating issue in its multiple dimensions. They describe, examine and analyze the way corporations craftily “bricole” political and economic interests; the ambiguous status and roles of international non-state organizations; the permanent duality between doing-good and making money that corporations embrace. They uncover a rather discrete but central transformation of today’s definition of public intervention.’
– Christine Musselin, SciencesPo, Paris, France

‘Power, Policy and Profit tackles the important and understudied problem of how firms attempt to shape their environment, especially their political and institutional environments. The essays go well beyond examining well-known activities to shed light on venues, strategies and events to which researchers have previously given scant attention. As such, the volume makes an important contribution and promises to stimulate important new lines of research on corporate power.’
– Stephen R. Barley, University of California Santa Barbara, US

1. Building an architecture for political influence: Atlas and the transnational institutionalization of the neoliberal think tank
Marie-Laure Salles-Djelic

3. Policy making as collective bricolage: The role of the electricity sector in the Making of the European carbon market
Mélodie Cartel, Eva Boxenbaum, Franck Aggeri and Jean-Yves Caneill

7. Talking like an institutional investor: On the gentle voices of financial giants
Anette Nyqvist

Reflections: Leaving Flatland? Planar discourses and the search for the G-axis.
David A. Westbrook

How to Use a Discursive Approach to Study Organizations